Frank Paul Byrne was born on January 27, 1920 to Joseph and Marie Byrne who lived in Phoenixville , Pennsylvania. Frank was the fourth of seven children. His father was involved with managing the family's business, theT. F. Byrne Knitting Mill. The Mill was begun by his grandfather, Thomas F. Byrne, who emigrated from Ireland, and became one of the largest knitting mills in the country, specializing in seamless underwear.  Frank was a member of St. Ann’s Church and graduated from St. Ann’s Parish School. St. Ann’s was constructed by donations from his grandfather in memory of his mother, Ann Lynch Byrne, dedicated in 1907. 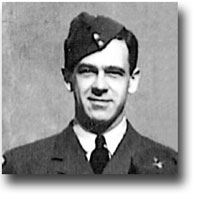 Frank graduated from La Salle High School in 1937. He was on the Tennis Team 3rd and 4th years, Year Book staff, and member of the famed Linton Lads.

He then continued on to La Salle College, graduating in 1941. While at LaSalle, Frank learned to fly at Wings Field on Narcissa Road in Blue Bell, Pennsylvania. Wings Field is the oldest operational airport in the country, established in 1930.

Hugh O’Neill, writes the following of his remembrances of his cousin Frank:

Frankie grew up in the best of worlds in Phoenixville during the late 1930’s. His father had a tennis court built on their South Main Street property. It was the summer Mecca for all their young cousins and friends. Frankie became an expert tennis player beating all who joined in. Frankie went on to be a star on his high school and college teams.

If you had your own car in those days, you were king. Well Frankie had a Ford Convertible Coupe and nothing could beat driving around town with friends with the top down.

Summertime was not all tennis and as with all boys, there was a swimming hole named “BAB” where the cousins would all meet on a hot afternoon. The water was cool and refreshing. To get to the Pickering Creek Reservoir you had to walk through several hot farm fields and then return through the same. While swimming you had to be on the alert for the Reservoir Manager who would chase you if you were seen. 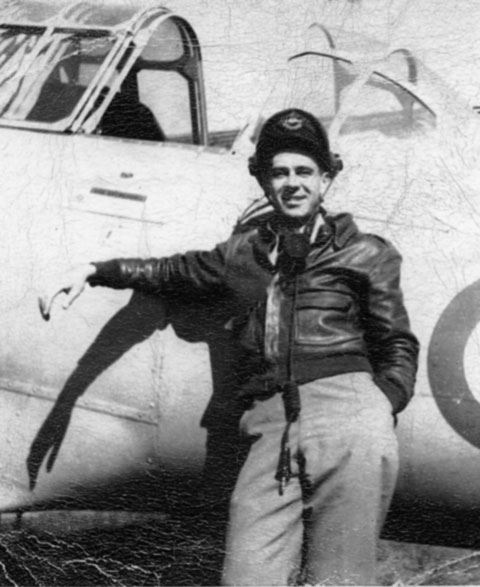 While in college Frankie learned how to fly and this being one of his dreams come true, he and three other friends bought an old Bi plane together. They flew it out of Wings Field in Blue Bell. My brother Frank and I were fortunate to have a chance to be flown over Phoenixville and Valley Forge. This was a two seat open cockpit with just a seat belt to hold you in. Frankie did not fly up side down and did show us all kinds of other maneuvers. It was enough to make you glad to be back on the field after our first trip. It was a thrill for any young boy of eleven. I’ll never forget that experience. Another summer adventure for Frankie was performing Wheel’s. Frankie would borrow his brother’s Ford Model T and with three friends, including my brother Tom, they would play this game. They would start about half way to Star Street on Second Avenue and see if they could turn on to Main Street on two wheels. One friend would be a lookout on Main Street while the other two would hang on to the car standing on the running board as it turned on to Main Street. We were able to watch this because our house was on the opposite corner. We had a large covered porch where we could see it all without being seen.

This could only be done in those hot summer days when the Town was very quiet and with little Main Street traffic. Frank tried to enlist in the Army Air Corps, but was rejected because his vision was not quite 20/20. He then traveled to Canada and enlisted in the Royal Canadian Air Force, in October 1941. (American Citizens were permitted to join the RCAF or RAF, before December 7, 1941; afterwards they were not, as the US needed all the servicemen we could enlist.) Upon completion of initial training, and then elementary flying training, Frank was posted to Course 55, No. 14 Service Flying Training School, Aylmer, Ontario on May 9, 1942 to commence advanced flight training on the North American MK II Harvard, known in the U.S. as the AT-6 military trainer. Frank and 11 fellow Americans received their pilot's flying badge (RCAF pilot wings) during a "wings parade" on August 28, 1942. He also received a commission as a Pilot Officer and was posted to No. 6 Service Flying Training School, Dunnville, Ontario to commence duties as a flight instructor. 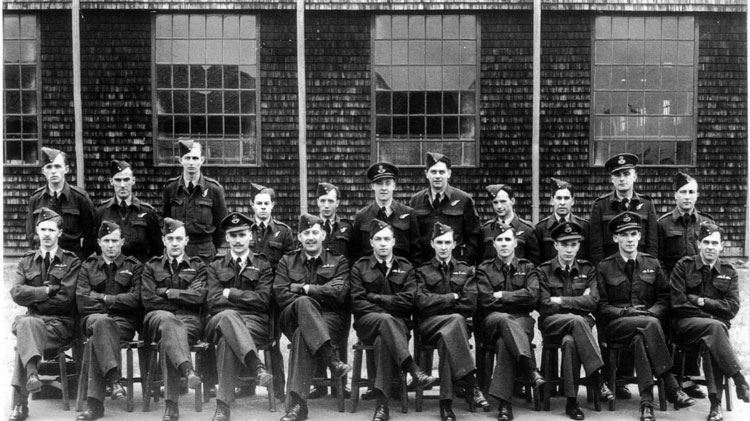 Frank applied for overseas services and was reassigned to Greenwood, Nova Scotia, were he received operational training on the famed British de Havilland Mosquito fighter-bomber. This was considered a choice assignment. It was quite an adjustment going from the single-engine AT-6 with 550 horsepower to the twin-engine Mosquito with two 1,250 horsepower Rolls Royce Merlin engines.

The Mosquito was a very fast fighter bomber (top speed close to 400 mph, a bit faster than the Spitfire), constructed mostly of a special plywood of Ecuadorian Balsawood and Canadian birch. The aircraft was glued and screwed together; the wing requiring 30,000 brass screws! British and Canadian Furniture Factories produced the plywood components. The aircraft was the fastest British bomber until 1951, however it did not have any armor protection, as did most US aircraft.

In November, Frank received a furlough and returned to Philadelphia and Phoenixville, with a fellow instructor, John Ballachey (pictured with Frank, at right). 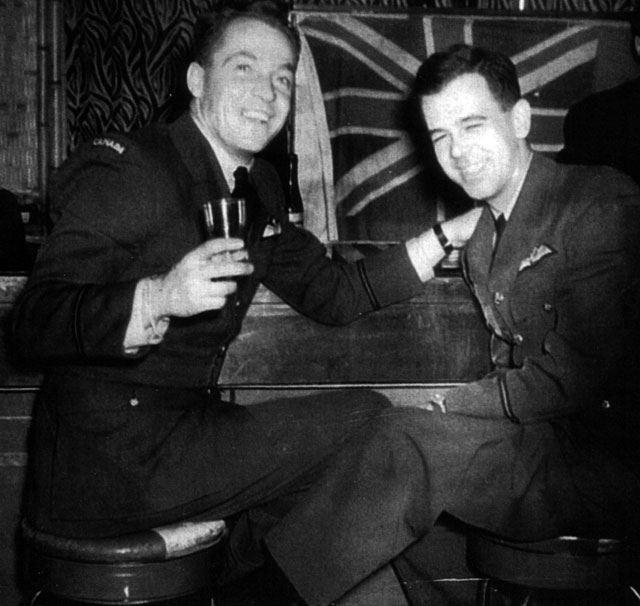 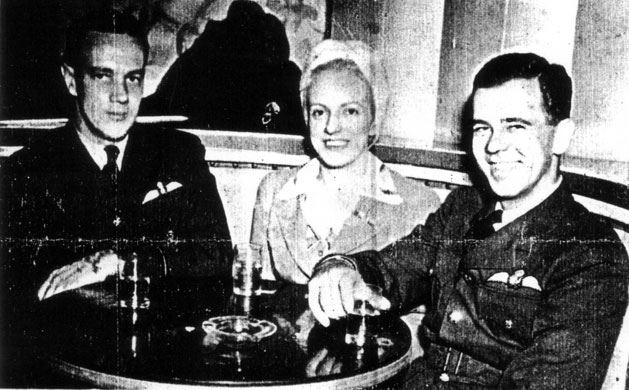 Shortly after, Frank and John were shipped overseas to England and assigned to operational squadrons, they were given advanced training on the Mosquitoes. Frank was assigned to Squadron No. 515, John to No. 107.

Frank’s aircraft was shot down in April while on a practice mission over England. His friend John Ballachy recalls the incident:


My next “encounter” with Frank came shortly thereafter - Frank was doing a practice Intruder Mission (at night). He was attacked and shot down by a German night fighter over the city of Grantham. Frank was unhurt - he bailed out, except for a few cuts and nicks. He called me the next day at my station to pick him up and return him to his squadron. When I arrived at Grantham I found him royally entertained by my younger brother Frank and a close friend of mine from Calgary, Ross Gould - both pilots. I knew my brother was in England but not where until then. Needless to say we had a very happy evening at Grantham and I took Frank “home” the next day. That was the last time I saw him.

Frank and I spent many of our leaves together (along with other good friends) in various places in Canada and the U.S., as well as London.

In May, the tempo of operations vastly increased, preparing for the D-Day landings in Normandy soon to come. Missions were increased in all areas of Nazi occupation, to keep the Germans guessing as to where the landings would occur.

On a mission over Holland the night of May 12-13th, Frank’s Squadron damaged a number of German aircraft on the ground, shooting down one aircraft, but also losing one of their own...aircraft No. NS 949.

Flight Officer Frank Paul Byrne was Killed In Action on May 13, 1944. Frank’s body was never recovered. His name is inscribed on the Runnymede War Memorial, Englefield Green, Egham, Surrey, England. Frank's navigator, Victory Payne, bailed out and was captured. He died in a German POW camp.

Frank’s brother, Theodore, joined the Army Air Corps in September, 1942. He was in Pilot training in Miami, Florida along with actor Clark Gable, who was in the same group.