Osborne Beeman Wiseman was born on February 20, 1915 in Zanesville, Ohio to Paul and Margaret Wiseman. Osborne was one of two children.

Osborne attended the Lash High School in Zanesville from 1928-1932. He was chairman of the Motto Committee, a member of the Glee Club, and on the Zanesvillian Yearbook staff.  Osborne did not participate in athletics, and did not appear to be a leader or heroic, but "Heroes are often hidden in normalcy, until the need arises".

Little is known of his family and early life, but he was determined to become a Navy Pilot. Osborne received an appointment to the Naval Academy from the Fifteenth Ohio District and entered the Academy at Annapolis, Maryland in 1934.

In the days before radios in the dorms, midshipman would sing or ‘croon’ popular songs for entertainment. Ozzie was known for his talented voice. 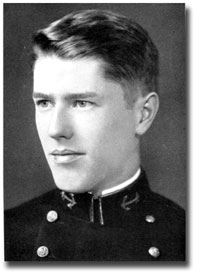 After graduation from the Naval Academy in June 1938, Osborne was commissioned as an Ensign. He married his wife June (Midshipman are not allowed to be married until after graduation). They lived in Kennett Square, Pennsylvania.   Ensign Wiseman reported for sea duty on the aircraft carrier USS Saratoga, CV-3, until October, 1939. He was then detached for the fitting out of the new USS Roe DD-418, a Sims Class Destroyer then at the Charleston, South Carolina Navy Yard. Wiseman served on the destroyer through her commissioning (January 5, 1940) and was detached in September, 1940 for flight training as a Naval Aviator. Osborne received training at Pensacola Naval Air Station and received his golden ‘wings’ in May, 1941. He was then assigned to Bombing Group 3 (VB-3) on board the USS Saratoga.  Osborne was a Dive Bomber pilot flying the Navy’s Northrop BT-1 and later the famous Douglas SBD Dauntless, a refined version of the BT-1. The ship made two trips to Pearl Harbor for training in the beginning of the year.  At the time of the Pearl Harbor attack, she was just returning from Bremerton, Washington after a short overhaul. The port visit to San Diego was cut short, and the Saratoga was ordered to sea immediately. June met Osborne in California when he had a few days leave while his ship was being overhauled. But his leave was cancelled after the Japanese Attack on Pearl Harbor. It was the last time she saw her husband. Saratoga, with Enterprise CV-6 and Lexington CV-2 loaded Marine Corps aircraft to reinforce the Marines on Wake Island, but arrived too late. Wake Island fell on December 23rd. The Saratoga continued operations in the Central Pacific, but was torpedoed on January 11th by the Japanese submarine I-16, 500 miles south-west of Oahu. The ship returned to Hawaii under its own power but needed repairs. Obsorne's squadron was transferred to the Enterprise, to serve in Bombing Group Six. The Enterprise accompanied the aircraft carrier USS Hornet CV-8 in the daring Doolittle Raid in April, 1942. Sixteen twin-engine Army B-25 Mitchell bombers were loaded on the deck of the Hornet to bomb Japan. This was a daring feat, as the bombers were larger than aircraft designed to take off from a carrier. The task  was to launch the bombers off the carrier within 400 miles of Japan, drop their bombs on Japan and fly on to China. The mission was in the utmost secrecy, as they had to sail so close, the carriers were in danger from the large Japanese fleet as well within the range of enemy bombers. The Enterprise provided scouting and protection for the Hornet, as the Hornet’s deck was crowded with the B-25’s. The ships radar detected enemy contacts during the night and Halsey ordered the Task Force to turn north for an hours sailing, then turned back west towards Japan. Osborne was flying a scouting mission ahead of the Task Force at dawn. When Task Force was 650 miles from Japan he spotted Japanese fishing boats serving as pickets ahead of the fleet. Osborne flew low over the deck of the Enterprise to drop a note around 6 a.m. (because of radio silence) with the information.  Admiral Halsey ordered the B-25 bombers to launch. In May, Osborne’s squadron transferred to the USS Yorktown CV-5. Lt. (jg) Osborne was one of 19 pilots, and became the squadron's personnel Officer. He served under Lieutenant Commander Maxwell Franklin Leslie, and was the second section leader in the third division of the Squadron. Osborne was was assigned to fly aircraft B-16 (SBD-3-02327) with his radioman. ARM3c Grant Ulysses Dawn. from, Tennessee. Along with Enterprise, Hornet sailed northeast of Midway Island to meet the Japanese attack on Midway. On June 4th, when the Japanese four aircraft carriers were found, the carriers launched all available aircraft for the attack. While another squadron attacked another enemy carrier, Osborne's group attacked the Soryu, which was misidentified as the carrier Kaga. Preparing for the dive bombing attack, they used a newly installed system to electrically arm their bombs. However, this failed, and instead, released the bombs before they were aimed. Warned of the problem, the remaining pilots did not use this system. The Dauntless dive bombers attacked out of the sun. The first four aircraft lost their bombs but attacked never the less, using their machine guns. The following aircraft hit the carrier with three bombs, dooming the enemy ship. Lt. (jg) Wiseman's target was the Soryu, but it  was fatally hit by other aircraft of his squadron, so he attacked a nearby battleship. Returning to his carrier, he was “waved off” and instructed to land on board the Enterprise, as a wave of Japanese bombers was approaching the Yorktown and ultimately fatally damaged the ship. Osborne participated in the second strike, launching from the Enterprise. His squadron’s target was the last of the four undamaged enemy aircraft carriers: the Hiryu. Osborne hit his target and sealed the fate of the last remaining enemy carrier in the Midway Battle Fleet, producing an overwhelming victory which became the turning point of the war. Osborne’sDauntless Dive Bomber was attacked and shot down by the revengeful Japanese fighters. Neither he, nor his radioman/gunner Grant Dawn (ARM 2/c) was ever heard from again. Osborne’s wife, June, was notified by telegram that he was Missing In Action. After a year, he was officially listed as Killed In Action. In November, 1942, she received notification that her husband was awarded the Navy Cross Citation. The Navy Cross is the Navy’s second highest award, second only to the Congressional Medal of Honor. She was not at liberty to permit its publication, due to the need for secrecy during the war.  Wiseman’s Navy Cross Citation signed by President Roosevelt, reads:

“For extraordinary heroism and distinguished service as pilot of an airplane of a bombing Squadron in action against enemy Japanese forces in the Battle of Midway during the period of June 4-6, 1942.   Defying extreme danger from a concentrated barrage of antiaircraft fire and fierce fighter opposition, Lieutenant (junior grade) Wiseman, with utter disregard for his own personal safety, participated in persistent and vigorous attacks against the Japanese invasion fleet.   His gallant intrepidity and loyal devotion to the accomplishment of a vastly important objective contributed in large measure to the success achieved by our forces and were in keeping with the highest traditions of the United States Naval Service”

Lieutenant (jg) Osborne Beeman Wiseman is memorialized at the Tablets of the Missing at the Honolulu Memorial Cemetery, Hawaii. The Navy honored Osborne by naming a ship after him – the USS Wiseman DE-667, a destroyer escort of the Buckley Class. The ship was constructed by the Dravo Corporation in Pittsburgh, and commissioned at Algiers, Louisiana on April 4, 1944. Mrs. June Holton, Osborne’s widow, sponsored the Wiseman. How important was this Battle in which  Lieutenant Wiseman played a key role?  A battle often neglected in our history books, and little known by the public today, this victory was the keystone of our victory in World War II. Some clues can be found in quotes from historians. The inscription dedicated to the Battle of Midway on our National World War II Monument in Washington written by Walter Lord:

They had no right to win. Yet they did, and in doing so they changed the course of a war…even against the greatest of odds, there is something in the human spirit – a magic blend of skill, faith and valor – that can lift men from certain defeat to incredible victory.

Then came Midway. Through an extraordinary combination of the skill and courage of our pilots, splendid intelligence, prudent risk-taking by our commanders that paid off, and sheer good luck, the apparently inferior American forces were victories. This victory occurred despite the inferiority of our aircraft, the ineffectiveness of our torpedoes, the substantial absence of backup surface ships, and our overall numerical inferiority. You know the rest! Four Japanese carriers had been sunk. It all confirmed the dictum of Otto von Bismarck: "the Lord God has special providence for fools, drunkards, and the United States of America." The Japanese offensive had now been blunted. The Japanese fleet turned back toward the Home Islands and the opportunity for victory had been lost forever. Roosevelt could now execute his Grand Strategy, with all that was to imply regarding the condition of post-war Europe.

The annals of war at sea present no more intense heart shaking shock then this Battle in which the qualities of the United States Navy and Air Force and the American Race shone forth in splendor, the bravery and self-devotion of the American Airmen and sailors and the nerve and the skill of the leaders was the foundation of all.