Howard Green Potts was born on June 13, 1920 to Joseph and Mabel Potts who lived in St. David’s, Pennsylvania. He was one of five children.

Howard attended local schools, and after the enemy attack on Pearl Harbor on December 7, 1941, joined the Navy to defend our country. He enlisted on January 6, 1942. After basic training, Howard was assigned to the 212', 602 ton Patrol Yacht USS Cythera PY-26. Cythera was a converted civilian yacht constructed in 1917, and acquired for use by the Navy in World War I, then returned to the owner, Standard Oil financier William L. Harkness, after the war.

At the outbreak of World War II the Navy had few escorts to counter the increasing German U-boat onslaught. In 1941, the Navy again leased the motor yacht to supplement its escorts. It was refitted at the Philadelphia Naval Shipyard, adding two 3" guns, machine guns, and depth charges. The USS Cythera was commissioned again on March 3, 1941.

The Cythera was bound from Norfolk to Hawaii through the Panama Canal when, unbeknownst to them, the German U-boat 402, was stalking them off the coast of North Carolina - about 120 miles off Cape Fear. The Cythera was zigzagging, a precautionary measure to make a more difficult target for submarines. The U-402 fired three torpedoes at the little ship, one passed ahead, another past behind, and the third hit the center, immediately breaking the craft in two. 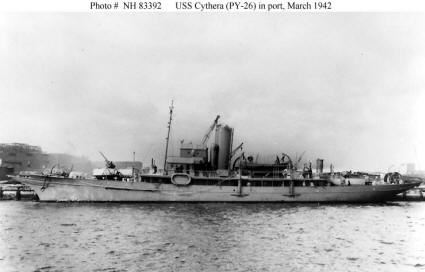 Of the crew of 71, only two survived. They were picked up by the U-boat and transported back to occupied France as prisoners of war. Seaman Second Class Howard Green Potts was killed in action on May 2, 1942. He is remembered on the Tablets of the Missing in Action or Buried at Sea at the East Coast Memorial, in New York, New York.