Richard Joseph Hamilton was born on May, 8 1923. His mother later moved to Coatesville in the 1930s.

Richard enlisted in the Navy, entering service on September 4, 1941. He received basic training at Norfolk, Virginia, then Class A training at their machinist school at Norfolk, becoming a Fireman 3rd Class. Fireman is a rating for tending and operating a ships boilers.

Richard was assigned to serve on the U.S.S. Vincennes CA-44, a heavy cruiser (mounting 8" guns) of the New Orleans Class.

The Vincennes returned to Norfolk on January 4th from escorting a convoy to Capetown, Africa. Richard’s ship was sent to the New York Navy yard to be prepared for combat. She departed on March 4th for the Pacific Theater of Operations, transiting the Panama Canal. 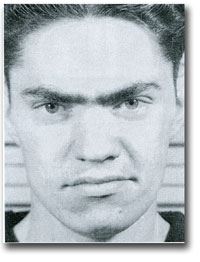 In April she became part of Task Force 18, centered around the aircraft carrier Hornet CV-8, with the Enterprise CV-6. The Hornet deck was loaded with 16 Army B-25 medium bombers for the famed Doolittle Raid. The task force sneaked across the Pacific to launch the B-25 aircraft considered too large and heavy to take off from an aircraft carrier, to attack Japan. Hero Osborne Wiseman was on patrol from the Enterprise and spotted enemy fishing boats as pickets, and flew low over the Enterprise to drop the message. Admiral Halsey then ordered the B-25’s to launch, before the task group was discovered. The Doolittle Raid, although causing minor damage, was a great victory, attacking the enemy homeland early in the conflict. The mysterious aircraft were reported by President Roosevelt as coming from Shangri-La (a fictional, mystical, harmonious valley described in the popular 1933 novel “Lost Horizon”, as well as the name of Roosevelt’s yacht). Richard’s ship, then participated in the Battle of Midway, helping to protect the carrier Yorktown, on which Hero Wiseman served. The Vincennes then participated in the landings in the Solomon Islands: Guadalcanal, Florida Island and Tulagi on August 7th. Richard’s ship escorted the transports loaded with Marines and their equipment. These landings were the first amphibious landings by our country since 1898, beginning the desperate seven month battle for Guadalcanal. The Japanese reacted on August 8th and sent numerous aircraft to attack the fleet and our forces. On the night of August 9th their Navy arrived, completely surprising our forces, in the Battle of Savo Island, probably our Navy’s worst defeat.A description of the Vincennes in this battle is described below (taken from the Vincennes entry on the Wikipedia site.

The first Japanese searchlight beams picked out Vincennes' splotchy camouflage shortly after 01:55, and the American cruiser opened fire with her main battery turrets to shoot out the troublesome light. Within a minute, however, Japanese shells bracketed the ship and Vincennes shuddered under the impact of the hail of steel screaming in from the ebony sky. Bridge, carpenter shop, "battle II," and radio antenna trunks all were hit in the first salvo. Altering course to port, Riefkohl - who had leapt to the bridge at the alarm - rang down for increased speed; but, in the deafening din of battle, and with his ship and internal communications disrupted, it is doubtful that the order was received. Still moving at 19.5 knots, the heavy cruiser reeled under the impact of another group of direct hits.Some of the shells in this group set afire the volatile planes in Vincennes' hangar space, and the resultant flames defied all attempts to put them out. A direct hit knocked the after antiaircraft director overboard. At 02:00, Vincennes heeled to starboard in an attempt to evade the accurate enemy fire, but the probing Japanese gunners were not about to let the already sorely wounded ship escape. One or two "Long Lance" torpedoes then ripped into the ship's number 1 fire room and put it out of action. Losing steering control five minutes later, Vincennes was dead in the water within minutes. Rapidly hitting shells quickly reduced the ship's gun power to a fraction of its original strength and before long, snuffed it out entirely. Like a pummeled and reeling challenger in the boxing ring, Vincennes wallowed to a halt. Hit at least 57 times by 8- and 5-inch shells, the ship gradually assumed a more alarming list. As if mercifully, at 02:10, the Japanese ceased fire and retired, leaving Savo Island and the burning hulks of the three American cruisers of the northern force in their wakes. As Vincennes' list increased to port, Riefkohl circulated the command to abandon ship at 02:30. Serviceable life jackets and rafts were broken out, and the crew began abandoning ship. At 02:40, the captain went down to the main deck and joined the last men to leave the sinking cruiser and jumped into the tepid waters of what would come to be known as Ironbottom Sound. Riefkohl subsequently wrote a fitting epitaph:

Struck from the Navy List on 2 November 1942, Vincennes was awarded two battle stars for her participation in the Battle of Midway and the invasion of Guadalcanal. Fireman 2nd Class Richard Joseph Hamilton was Killed In Action on August 9th 1942. His mother was informed that her son was Missing In Action. On November 27th, she received notification that he was Killed In Action. One-report states Richard was found washed up on a small island in the Solomon’s. This is the same battle that Hero John Horshock and Leff Yale perished on board the USS Quincy CA-39, as well as Letser Diemer on Richard’s ship, while Hero George Johnson died a few miles away on Tulagi, saving his patrol.