Robert Pollock Guiler, III, was born on September 10, 1916 to Robert Pollock Guiler, Jr., and Zelma Pilow Guiler who lived in Washington, D.C. Robert was the only son of three children. His father, a 1909 Naval Academy graduate from Ohio, served in the Navy until he retired with the rank of Captain in 1937. The family moved around the country following his naval service and lived at numerous locations, including San Diego, Washington, DC, and Philadelphia. His father served on various ships including cruisers, tenders and battleships through World War I, then as gunnery officer in the battleships Arkansas BB-33 and Nebraska BB-14.

Robert graduated from the private Severn School in Severna Park, Maryland in 1933. Many graduates attended the Naval Academy, and 73 died in service in World War II, including a graduate killed on the famous Destroyer USS Reuben James (sunk by U-552 while we were still at peace). 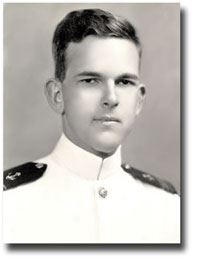 Robert then attended the Phillips Exeter Academy in Exeter, New Hampshire -  a private college preparatory school north of Boston. Robert received an appointment to the Naval Academy, through the honorable R. T. Seacrest of the 15th District of Ohio, his father’s home state. He entered the Annapolis academy on June 7, 1934. Robert played on his battalion Lacrosse team his 3rd and 4th years, water polo his 3rd and battalion track his 2, and 3rd years. The Lucky Bag, the Naval Academy Yearbook, writes the following on Robert:

A man who spends his academic leaves in perusing the possibilities of the ship yards and naval gun factories; a man born and brought up in direct contact with the nation’s first line of defense; a man positive in his convictions as to his course in life and determined in his application to reach the goal; loyal to the service in which he serves; and the possessor of a dry humor and a sardonic outlook on the system. A lack of interest in routine academic subjects is more than overbalanced by a thirst for professional knowledge. The cruise he counts as time best spent. By these words you will know him, “A hundred years from now what difference will it make?"


Robert graduated in 1939, a year after hero Osborne Wiseman, and commissioned an Ensign in the United States Navy. The same year, his father recalled to active duty and was appointed as the Port Director of the Fourth Naval District from 1939-1945, a very crucial and prestigious position. The Fourth Naval District included the Middle Atlantic States of Pennsylvania, Delaware and southern New Jersey, and was headquartered at the Philadelphia Naval Shipyard. The family then took up residence in Philadelphia. Robert was assigned to serve aboard USS San Francisco CA-38, a Heavy Cruiser of the New Orleans Class. The cruiser, a division flagship, had just returned from a good will tour of eastern ports and west coast ports, transiting through the Panama Canal back to Norfolk in June. World War II began in September, 1941, and the San Francisco left Norfolk on Neutrality Patrol, patrolling the Caribbean sea. Robert applied for Submarine Duty and received acceptance. The Silent Service, so named because submarines silently stalked their targets from beneath the sea, was an all-volunteer branch of the Navy. In between his duties at sea, Robert met Beatrice Varney Kerr of Downingtown. Her family invited him to live on their estate. Glendalough was in the 204 acre John Kerr property located in East Caln Township. Beatrice and Robert were married on Saturday, June 7, 1941. After the wedding and an abbreviated honeymoon, Robert returned to the submarine base in New London, Connecticut, where he was stationed. Robert was assigned to serve aboard USS Grampus SS-207, a new submarine of the Tautog Class. The Grampus was constructed by the Electric Boat Company of Groton, Connecticut, and commissioned on May 23, 1941. After shake down and training cruises the submarine transited the Panama Canal and arrived at Pearl Harbor on February 1, 1942. On their first war patrol Robert’s ship sank an enemy tanker, and scouted Kwajalein atoll. Her second and third patrol Robert’s ship was hampered by very heavy antisubmarine patrols and poor visibility off Truk (the major Japanese anchorage in the South Pacific) and along the Philippine islands. The Grampus returned to a US submarine base in Fremantle, Australia. On her fourth patrol in October, 1942, Robert’s ship delivered valuable coast watchers behind enemy lines, who radioed back vital information. This despite the presence of enemy destroyers. The Grampus then patrolled near Vella Lavella in the Solomons, during the height of the Guadalcanal Campaign. The area was teeming with enemy ships. She sighted four cruisers and 79 destroyers during the patrol and they attacked her with 104 depth charges. Because of faulty torpedoes, the Grampus was not able to score any hits on these fast moving ships but received 104 depth charges. Faulty torpedoes were a serious problem in the early portion of the war. These torpedoes ran 10 feet deeper then set, and the secret magnetic exploders (when fired to travel just under a target, it would supposedly detonate underneath, blowing a hole in the bottom of the ship) completely failed. Even the contact detonator would often shatter when the torpedo hit the side of a target, causing the torpedo to bounce off a ship, failing to explode. This put our ships and crews at great risk, as the torpedo wakes would mark the location of the submerged submarine for enemy attack. Her fifth war patrol in January 1943 yielded similar results. On her sixth war patrol, Robert’s ship departed Brisbane, Australia on February 11, 1943, with the submarine Grayback headed back into the Solomon Island area. The Grampus failed to return from patrol. The Japanese reported sinking a submarine on February 18 in the area, but the Grayback reported seeing the Grampus on March 4th. On March 5th, two Japanese destroyers reported attacking a submarine in Blackett Strait, and spotting a heavy oil slick the next day. When repeated attempts to contact the Grampus by radio failed, the Navy reluctantly declared the Grampus presumed lost with all hands. Lieutenant Robert Pollock Guiler III was Killed In Action on March 5, 1943. Robert received a Silver Star with Gold Star (two Silver Stars) for his heroism. He is remembered on the tablets of the Missing in Action or Buried at Sea at the Manila American Cemetery at Fort Bonifacio, in the Philippines. He was survived by his wife, Beatrice and his 2-year-old daughter, Margaret. The Naval Academy Yearbook records Robert’s question, “A hundred years from now what difference will it make.” His service, sacrifice, and the service and sacrifice of all our heroes, did make a difference. Sixty-eight years later and counting, Chester Countians remember. Credits Research by  Don Wambold, WCMSC