John Andrew Grycky was born on July 7, 1918, to Andrew and Pauline Grycky who resided in Coatesville, Pennsylvania. John’s parents immigrated from the Ukraine. John's father was an accomplished violin player.  John was the oldest of three children.

John was known by his friends as an optimistic, easygoing, and caring individual. He was intelligent and modestly helped other students with their studies, including fellow student, Charlotte. John hoped to marry Charlotte after college. John had a love and talent for music, and became an accomplished violinist. He was chosen as a member of the all-state high school orchestra, a step towards his goal of one day playing with the renowned Philadelphia Orchestra.

John was a member of the popular Grycky Trio, which included his sister as pianist, brother on trumpet, and John on the violin. They charmed audiences in churches, synagogues and grange meetings, and sometimes on local radio stations. 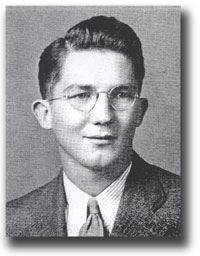 John was one of five close friends: Jim Latta, Harry Lackey, hero Herbert Hagamon, and hero Vernon Rubincam. The friends met nearly every Sunday to play touch football at the Latta’s Farm in Parkesburg.  John graduated from the Scott High School in 1936 and then attended West Chester State Teachers College graduating in 1940 as a Music Major. Afterwards, he taught music at a private school. In addition to teaching, John played the French Horn in the orchestra, concert band, and marching band at West Chester State Teacher's College.

On December 7, 1942, Pearl Harbor, John set aside his job and other responsibilities to help defend his country. His friends felt the same. Harry Lackey had a vision problem which prevented him from enlisting but he served on the home front, making critical castings for the Manhattan Atomic Project while working at Luken's.
John, Jim Latta, Vernon Rubincam and Herb Hagamon joined the Armed Forces. They called themselves the “Knights of the Square Table” because they were like knights going to defend their Country, and they were going to “Square” things up. The “Knights” made a pact, that if any survived, they would attend to the families of the fallen.

John enlisted in the Navy on January 16, 1942. After basic and advanced training, he was assigned to the new USS Juneau CL-52 as a radio operator. The Juneau was a new design, often referred to as Anti Aircraft Cruisers, in that their heaviest armament was the new rapid firing 5" gun of which the Juneau had 16.  After a shakedown cruise, Juneau patrolled off Martinique and Guadeloupe Islands to prevent the escape of Vichy French ships. the Juneau also patrolled the east coast shipping lanes. The Juneau then transited to the Panama Canal in August and headed for the South Pacific where they joined Task Force 61. TF 61 included the aircraft carriers Wasp CV-7, and the Hornet CV-8, who were ferrying fighters to Guadalcanal. Guadalcanal and Henderson Airfield were crucial to the protection of Australia. The Japanese were constructing an air field when the Marines landed on August 7th. They planned to use it to further isolate Australia from the northwest. It was on these islands and the water between that heroes George Johnson, John Horshock, Leff Yale, John Toth and Harvard Fox died. On September 15, 1942, the SS Wasp, an aircraft carrier, was struck by three torpedoes from the Japanese submarine I-19. She became a floating wreck and had to be sunk. The Juneau and other escorting destroyers rescued 1.900 of her survivors. After returning the survivors, John’s ship continued to operate with TF 61 to protect and reinforce Guadalcanal. The Juneau participated in the battle of Santa Cruz Islands October 26-27, preventing a Japanese task force from reinforcing Guadalcanal. During this battle, two enemy carriers were extensively damaged. Despite the effective anti aircraft fire of the ships shooting down 20 of 27 enemy aircraft, the carrier USS Hornet CV-8 was badly damaged and was sunk the following day. The Juneau then joined the USS Enterprise CV-6, the only other remaining Carrier in the South Pacific. She added her effective anti-aircraft fire to save the Enterprise, shooting down 18 attacking aircraft. The Juneau returned to Noumea, New Caledonia for replenishment and repairs. While there, John received a “Dear John” letter from Charlotte - she had married another man and John was heartbroken and on the verge of a devastating battle. In November, the USS Juneau participated in the Naval Battle of Guadalcanal as part of Task Force 67. The Japanese sent a large task force as an all out effort by the “Tokyo Express” to reinforce their forces on the island, and to destroy our naval forces in the area. The enemy task force numbered 18 ships, and included two battleships, far exceeding the power of the Juneau’s cruiser destroyer. The American task force patrolled “Iron Bottom Sound” off Guadalcanal, and successfully fought off attacking enemy planes.. Next came the onslaught of the heavy Japanese task force. During this ferocious battle the American forces fought the enemy to a standstill, and both forces retired to lick their wounds. During the melee the Juneau was hit by a torpedo on the port side which caused a severe list, and she was down by the bow 12 feet. The ship continued on with only one propeller at 13 knots. At 11 a.m. on November 14 the Japanese submarine I-26 fired three torpedoes at the Juneau. She successfully avoided two, but the third torpedo hit and the ship quickly broke in two and sunk. Only 115 of the 820 men on board survived, including John. Chester County heroes Elwood Bickert and Malcolm Main went down with the ship. John helped several of his crew members into life rafts. John, older than many of his fellow sailors, the optimist and teacher, did his best to cheer the crew, telling them “to never give up!” He paddled for four hours in the increasingly heavy seas. When he finally allowed himself to be relieved, he continued paddling with his hands. John's raft became overcrowded, and he decided to swim to another raft nearby. While he was in the water, a shark sprung up a few feet from the raft and bit him on the right shoulder. John freed himself and swam back to his original raft using his one good arm. The crew helped him into the raft. His arm was nearly taken off by the attack and his mates could not stop the massive bleeding. John knew he could not survive, and would only be a burden to his fellow sailors. He quietly slipped over the side and into the sea. He was instantly attacked by two sharks, while the men on the raft watched in horror.  Of the 115 men in the water, only 10 survived. On January 14th, 1943, the family received a telegram from Rear Admiral Randall Jacobs Chief of Naval Personnel, that John was Missing In Action. A second telegram, from Secretary of the Navy James Forrestal, received in July notified the family that because of the lapse in time, it was concluded that John had been Killed In Action. John is remembered on the Tablets of the Missing at the Manila American Cemetery in the Philippines.