John Patrick Fedelen was born in 1918 and grew up in Phoenixville, Pennsylvania. He was one of two children. John’s parents passed away when he was young, and he and his sister lived with their grandmother, Mary Sockel, in Phoenixville.

John was a member of the Sacred Heart Church. He was employed at many locations but finally at General Electric in Philadelphia. John became engaged to Agnes Thren of West Lawn.

John enlisted in the Navy on October 15, 1942. He received basic training at Newport and the Naval Armed Guard School at Little Creek, Virginia. Merchant ships were armed with a mix of 5" and  3" inches guns as well as machine guns for self-defense. The collective power of the guns aboard merchant ships in a convoy helped to defend against enemy air attacks. The Naval Armed Guard, consisted of Navy personal detached to man these guns. But the biggest menace was from submarines, for which the armed guard could not mount an effective defense. Merchant ships suffered heavy losses to U-Boats during the first half of the war, and Merchant Marine sailors and the Naval Armed guard suffered heavy losses of life. 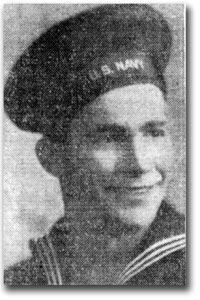 John returned home for a brief leave Christmas 1942, but had only a few hours to visit his family. John was assigned to serve as a member of the Naval Armed Guard on the SS West Portal, his first sea duty. This was the same ship on which Hero Ellis Morris from Kennett Square served. John’s last letter home was received a few days before he left on his first convoy.  He wrote: I am here for a couple of days only, I am well. And don’t worry. The West Portal was a small ocean going cargo ship of 5,376 tons with a crew of 77, and a Naval Armed Guard Detachment of 34 men. The Naval Armed Guard manned the guns placed on merchant ships. In early 1943, she sailed in convoy SC-118 consisting of 61 ships and eight escorts, from New York to Halifax, Nova Scotia, then on to Reykjavik, Iceland. The ship was carrying a cargo of clothing, food, trucks, mail and 135 Army, Marine and Naval personal. On February 5, 1943 the convoy was attacked by 20 German U-boats (three of which were sunk) southwest of Iceland in early February.   The U-413 torpedoed and sunk the West Portal. There were no survivors. Seaman First Class John Patrick Fedelen was Killed In Action on February 5, 1943. John’s sister, Mary, received a telegram on March 24th that John was Missing In Action. The telegram from Read Admiral Randell Jacobs, Chief of Naval Personnel stated:

The navy Department deeply regrets to inform you that your brother, John P. Fedelen, seaman, first class, United States naval reserve, is missing by action in the performance of his duty and in the service of his country. The department appreciates your great anxiety details are not now available.

In the spring of 1944, the Navy changed John’s status to Killed In Action.

Your brother, John Patrick Fedelen, on Feb. 5, 1942, was serving as a member of the armed guard crew of a merchant ship when it was torpedoed in mid Atlantic. Of the personnel of this ship, none have been located during the interim of a year.

A requiem mass for John was held at the Sacred Heart Church, attended by family and friends.  John is listed on the Tablets of Missing In Action or Buried at Sea at the Cambridge American Cemetery.