Millard Jackson Buchanan was born in February, 1924 to John and Lottie Buchanan of Elk Township, Pennsylvania. Millard was one of five children. Millard, who like to be called “Jack” graduated from Oxford High School in 1941. The high school yearbook  writes:

Jack is that bashful young gentleman from down Hickory Hill way. Jack is the President of Senior Ping Pong and from what we hear he can play a ready game. It may seem as if Jack doesn’t like the girls, but that really isn’t so: just give him time and he will prove  that he can be just as much a lady’s man as the rest of them.

Millard enlisted in the Navy, entering service on July 14. After basic training, he attended the Naval Radiomen Training School at the University of Wisconsin, in  Madison, graduating in December, 1942. 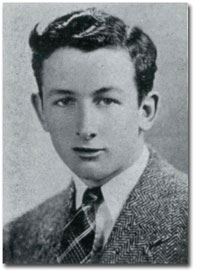 Millard received gunnery training at Cecil Field, Jacksonville, Florida, as well as aviation training. He received commendations for his proficiency at both schools. Millard received the rating of ARM 3rd Class – an aviation  radioman gunner.  He was then assigned to a carrier for further training on a cruise to Trinidad. Afterward, he was sent to Rhode Island. He served with CASU23 (Carrier Aircraft Service Unit 23) and Composition Squadron 32. On December 4th he traveled to Philadelphia over the weekend on Navy business. His parents met him in the city, the last chance they would have to see their son. On December 8, 1943, Aviation Radioman 3rd Class Millard James Buchanan was Killed In Action in an aircraft crash at sea.His parents were notified by Mack Berkowich, Chairman of the Oxford branch of the American Red Cross. Millard is remembered on the Tablets of the Missing or Buried at Sea on the East Coast  Memorial, in New York, New York.