Elwood Oscar Bickert was born on April 19, 1921 to Mr. and Mrs. Edward Bickert who lived in Lower Merion Township, Pennsyvlania, but later moved to Downingtown, Pennsylvania. His father, Edward worked at the paper mill in Downingtown.

Elwood was the youngest of ten children: five brothers and five sisters. Five of the children died in their youth.

Elwood enlisted in the Navy in December, 1941, shortly after the attack on Pearl Harbor. After completing basic training, he was assigned to serve on the new USS Juneau CL-52. The Juneau was a new design, often referred to as Anti-Aircraft Cruisers, in that their heaviest armament was the new rapid firing 5-inch gun – 16 on the Juneau. The ship was launched in October and commissioned on February 14th. Following shake down and training cruises the Juneau patrolled off Martinique and Guadeloupe Islands blockading the Vichy French Naval Units.

The USS Juneau then ordered to the Pacific through the Panama Canal in August, 1942. At that time, the ship joined Task Force 61 which included the aircraft carriers Wasp CV-7, and the Hornet CV-8, which were ferrying fighters to Guadalcanal. Guadalcanal and the Henderson Airfield were crucial to the protection of Australia. The Japanese were constructing an airfield when the Marines landed on August 7. They planned to use the airstrip to further isolate Australia from the northwest. It was on these islands and the water between, that heroes George Johnson, John Horshock, Leff Yale, John Toth and Harvard Fox died. 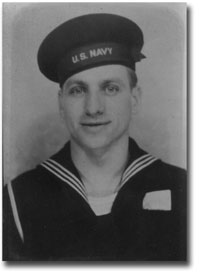 The carrier, Wasp, was struck by three torpedoes from the Japanese submarine I-19 on September 15th. She became a floating wreck and had to be sunk. The USS Juneau and escorting destroyers rescued 1,900 survivors.

After returning the survivors, Elwood’s ship continued to operate with TF 61 to protect and reinforce Guadalcanal. The Juneau participated in the battle of Santa Cruz Islands October 26-27, preventing a Japanese task force from reinforcing Guadalcanal. During this battle, two enemy carriers were extensively damaged. Despite the effective anti-aircraft fire of the ships - they shot down 20 out of 27 enemy aircraft - the carrier USS Hornet CV-8 was badly damaged and sunk the following day. The Juneau then joined the remaining carrier in the South Pacific – the USS Enterprise CV-6. She added her effective anti-aircraft fire to save the Enterprise, shooting down 18 attacking aircraft.

The Juneau returned to Noumea, New Caledonia for replenishment and repairs.

In November 12-15, the Juneau participated in the Naval Battle of Guadalcanal as part of Task Force 67. The Japanese sent a large task force as an all out effort by the “Tokyo Express” to reinforce their forces on the island, and to destroy our naval forces in the area. The enemy task force numbered 18 ships, including two battleships, far exceeding the power of the Juneau’s cruiser destroyer task. The American task force patrolled “Iron Bottom Sound” off Guadalcanal, and successfully fought off attacking enemy planes, six of which wre taken down by the Juneau.

Next came the onslaught of the heavy Japanese task force. During this ferocious battle the American forces fought the enemy to a standstill, and both forces retired to lick their wounds. During the melee, the Juneau was hit by a torpedo on the port side which caused a severe list, and she was down by the bow 12 feet. The ship kept going with only one propeller, at 13 knots.

On the morning of  November 14th, the Japanese submarine I-26 fired three torpedoes at the Jeneau. She successfully avoided two, the third one hit close to where the previous torpedo had hit. The ship broke in two and quickly sunk. Of a crew of 820 men, roughly 115 survived. Elwood went down with the ship. This is the same ship on which the 5 Sullivan brothers, as well as hero Malcolm Main, perished.

Seaman Elwood Oscar Bickert was Killed In Action on November 14, 1942. Elwood is remembered at the Tablets of Missing In Action at the Manila American Cemetery, at Fort Bonifacio, Manila

Elwood's father received the dreaded telegram in February, notifying him that his son was Missing In Action, and probably lost in action the previous November. His father received earlier notice from his son, Raymond, who was also serving in the South Pacific with Elwood. His letter was dated November 27th:

Dear Father, I received your letter today telling me Elwood’s ship is out here. I saw Elwood about a month ago. He was in good health and very well pleased about the Navy. I sure was glad to see him. He was over on my ship all that day; we had a good time talking about old times. He was the first one of the family I have seen for five years. What I am about to tell you won’t be easy to take. Elwood and I were both in the last battle of the Solomon Islands. It was the fourth battle I have been in out here, so far we have always been fairly lucky getting out with minor damages. It was the first time Elwood’s ship was in the Solomon battles. We were coming out at night and ran into enemy forces much superior to ours. My ship got out but the Juneau was sunk. I will not say Elwood was lost. There were about 70 men saved from her. He may be one of the lucky ones, I sure hope so. I have done my best to find out but it is hard to find out anything like that in wartime.

In addition to Raymond, another brother served during the War.