Joseph Pennock Woods was born on March 19, 1921 to Enoch and Alice Woods of Uniontown, Pennsylvania. Joseph was third born of six children

Joseph attended Unionville high school and was a member of Unionville Presbyterian Church.

Joseph left school to help support his family, and obtained employment at the Phoenolite Company in Kennett Square, then a division of National Vulcanized Fibre Corporation. He later worked at the Sun Shipbuilding Company in Chester.

Joseph married Jacqueline Jean Burkett of Wilmington, They began their family in Unionville.
Joseph and his brother, Carrol, enlisted in the Marine Corps on June 9, 1944 and received training at Camp Lejeune, North Carolina, and then Camp Pendleton, California. Joseph served in the First Marine Division and was sent overseas to the Pacific Theater of Operations in November, 1944. 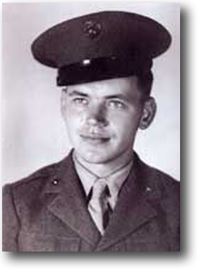 Joseph went ashore at the invasion of Okinawa on D-Day, Easter Sunday as part of "Operation Iceberg" - code-named because it was the largest amphibious invasion of the Pacific theater. The operation involved five Army divisions and two Marine divisions. The 82-day battle resulted in as many as 250,000 casualties - more than the casualties inflicted by the atomic bombs dropped on Hiroshima and Nagasaki combined.  Private Joseph Pennock Woods was Killed In Action on May 7, 1945. His wife, Jacqueline, received the fateful telegram on June 8th. Joseph was buried at a local cemetery on Okinawa, and at the request of the family returned for reburial in his home country in 1949. A service was held at the Unionville Presbyterian Church on February 6, 1949.  Three veteran’s organizations joined in honoring Joseph: the Swayne-Campbell-Testa Post of the VFW, William W. Fahey Post American Legion and the Chester County Detachment of the Marine Corps League. Interment followed in the Church’s cemetery. Joseph was survived by his wife, Jacqueline, and his three year old daughter, Gale.