William Ralph Wilson was born on June 9, 1917. He was the second of three children. His parents, Harry and Lulu eventually settled in Marshallton in 1937.

William graduated from Coatesville High School in 1935. He was known as friendly, easy-going, and hard working. William drove a 1939 Ford and worked at ESCO Cabinet Company and the ESCO Farm in Marshallton. The ESCO Farm was a showcase for their milking equipment.

William developed an interest in aviation and obtained a pilot’s license shortly before the war. He attempted to enlist in the Army Air Corps in January after the Pearl Harbor attack, but was rejected because he was underweight. He was later drafted into the Army in April 1943.

William was sent to Camp Shelby, Mississippi for basic infantry training. He was sent overseas in November, 1942 for the invasion of Italy. He was assigned to Company L, 3rd Battalion, 141st Infantry Regiment, of the 36th "Texas" Division as a replacement. 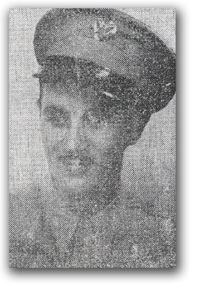 William landed at Anzio in January, 1944. His division was ordered across the Rapido River in rubber rafts to protect the troops on the beachhead. They were to attack the German positions entrenched on the far bank. The Rapido operation was a failure, and the division was devastated. Many never made it across, and those few who did, were killed or captured. William's parents received notification on March 15, 1944 that he was missing. He was listed as killed in action on July 27. He was not found and identified until 1949. A funeral was held at Friendship Methodist Church on March 19, 1949, he was buried in their cemetery.  Private William Ralph Wilson was awarded the Purple Heart, Combat Infantryman’s Badge, and the Medaille Commemorative de la Campagne d’Italie" from France, for his service.