Earle Ross Terry was born on March 2, 1925 to George and Eleanor Terry who lived in West Chester Pennsylvania. He was one of two children. His father, George, was a Deputy Sheriff for West Chester.

Earle, who liked to be called “Zeke” by his friends, attended West Chester High School. The Yearbook says Earl was “noted for his “smooth” dancing…he thrives on baseball and automobiles.  If there is anything left when he is done tinkering with a car, “Zeke” likes to drive it.  His future plans include either the Army or Penn State.”

Earle played the varsity basketball and was the star pitcher on the baseball team. He also played in the West Chester Community League and pitched for the Bernhard Schlegel Post American Legion team. 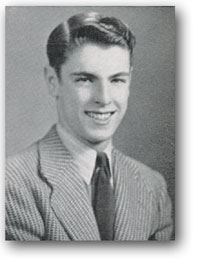 Earle was a member of the First Presbyterian Church in West Chester, and the Brandywine Grange, No. 60. Earle enlisted in the Army July 2, 1943, one month after graduating. He received basic training at Camp Hood, Texas, and advanced training at State College of New Mexico, Fort Leonard Wood and Camp Cook in California. Earle served with Company C, 303rd Infantry Regiment, 97th Division. During training, he played basketball and baseball in the service. He pitched his team to the 303rd Infantry championship at Camp Cook in a dramatic extra inning game. It is reported that he was contacted by a major league team about tryouts when he returned home from the service. Earle’s unit, The 97th Infantry Division*, sailed from New York harbor after assembling at Camp Kilmer, N. J. in February, 1945. They arrived at Camp Lucky Strike, a few miles from Le Havre on March 2nd. The 97th Infantry Division was attributed with the distinction of having fired the "last shot" of World War II in Europe. Sergeant Earle Ross Terry was Killed In Action near Tachov, Czechoslovakia on April 26, 1945, just eleven days before the war ended. His parents later received a letter from their son dated April 24th saying he was in Czechoslovakia. The fateful telegram was received by his parents on May 11, 1945. Services were held on December 10, 1948. Blake Bradley from Michigan who service in the same company as Earle, and former classmates were pallbearers. Interment with full military honors was at Birmingham Cemetery. His brother, George Jr. served in the Army in Italy.