Edward V. Stott was born in 1923 to Bertless and Anna Stott who lived in Phoenixville , Pennsylvania. Edward was the youngest of four children.

Edward attended Memorial Junior High School, located at 320 Second Avenue (pictured at right). This is the school in which the famed 1957 movie “The Blob” was filmed. It was refurbished and today is known as the Samuel K. Barkley Elementary School.

Edward was a member of St. John’s Lutheran Church. He found employment at Andrews Lumber yard and later at Phoenixville Iron Company.

Edward was drafted into service in the Army February 9, 1942. He received training at Camp Howze, Texas, and was sent overseas January, 1943. e was assigned to serve with the 349th Infantry Regiment, 88th Infantry Division;  the same Division in which Hero Robert Mock served.

In July, 1944, while in Italy, Edward spotted an overturned crate and tilted it up to rest his weary legs. The crate was booby-trapped, causing a mortar round to explode, wounding Edward's leg. From his hospital bed, Edward wrote that now that he was in the hospital, everything was alright and that he expected to be in the hospital for two more weeks. When he recovered sufficiently he would be released for duty. He wrote, “I couldn’t write earlier, because as you know, we were on the way to Berlin." 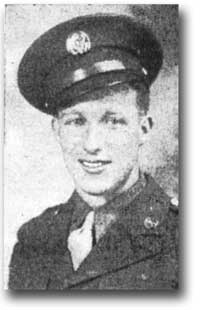 His father received the last letter from Edward dated June 24. Private First Class Edward V. Stott Died Non Battle on July 2, 1944 in Northern Italy.  Edward was buried in a local military cemetery. In 1949, he was returned for reburial in his home country aboard the SS Lawrence Victory, an Army transport. Services were held on November 13, 1949. Interment with full military honors was at the Green Tree Cemetery in Oaks, PA. A military escort, bugler and firing squad were provided by the Valley Forge General Hospital and Allied Veteran organizations. Edward received the Combat Infantryman’s Badge as well as the Purple Heart. Edward’s brother Donald, was Killed In Action on July 10, 1943. His cousin, Hero James Derix Died Of Wounds received on in Normandy, on July 7, 1944. Edward and Donald's mother, Anna, died suddenly of a heart attack on July 28, 1944 shortly after learning that both of her sons had recently been killed in the war along with her nephew.