George Hinchman Sias was born on April 10, 1922 to Andrew Lewis and Arkansas Sias who lived in Portsmouth, Ohio. George  was the youngest of four children.

George completed a grammar school education and then went to work as a construction laborer. George moved around often and at some point was a resident of Chester County.

George entered the service in the Army in West Virginia on January 16, 1943. He served with the 135th Infantry Regiment, 34th Infantry Division. This is the same Division in which hero Norman Becker served.

Wikepedia records in part the following of the 34th Division:

The division skipped the Allied invasion of Sicily (Operation Husky) and instead trained intensively for the invasion of the Italian mainland, with the main landings being at Salerno (Operation Avalanche) on 9 September 1943, D-Day, to be undertaken by elements of the U.S. Fifth Army, commanded by Lieutenant General Mark Clark. The 151st Field Artillery Battalion went in on D-Day, 9 September, landing at Salerno, while the rest of the division followed on 25 September. Engaging the enemy at the Calore River, 28 September, the 34th, as part of the VI Corps under Major General John Lucas, relentlessly drove north to take Benevento, crossed the winding Volturno three times in October and November, assaulted Monte Patano, and took one of its four peaks before being relieved on 9 December.

The Red Bull Division jumped off as part of the Spring 1945 offensive in Italy, 15 April 1945, and captured Bologna on 21 April after hard fighting against the 65th. Pursuit of the routed enemy to the French border was halted on 2 May upon the German surrender in Italy and the end of World War II in Europe.

Private First Class George Hinchman Sias was severely wounded on April 28, 1944, from artillery fragments to his face, arm and foot. He was transported to a military hospital, but died shortly after arrival on April 28, 1944 in Italy.

George is buried in the Green lawn Cemetery, in Portsmouth, Ohio. 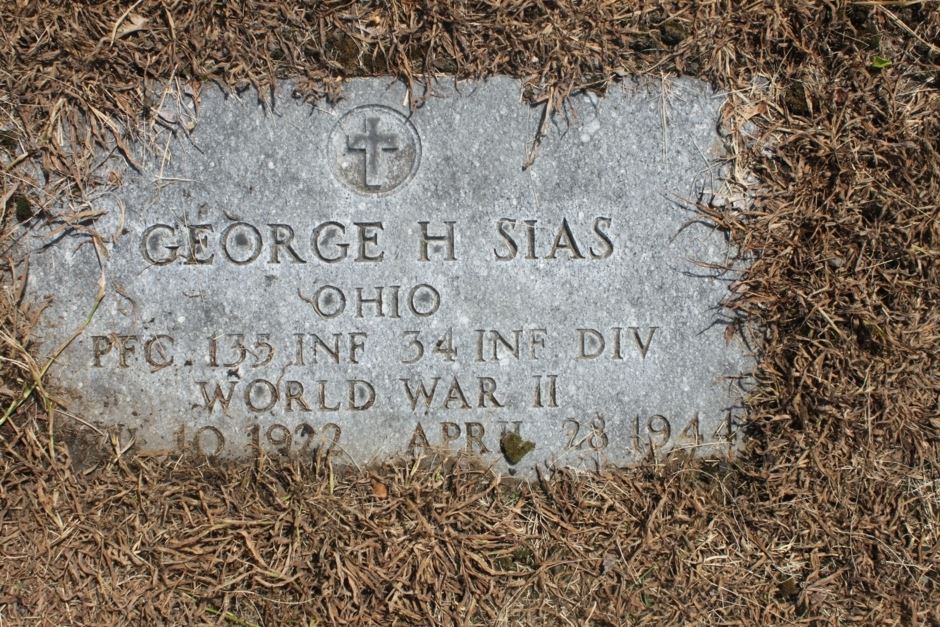