Herbert Roland Shenafield was born in 1919 to Arthur and Martha Shenafield who resided in Spring City, Pennsylvania. Martha was from Michigan as was Arthur’s mother. His father worked as a forge man at a local iron company, and later became the Street Commissioner in Spring City. Herbert was one of four siblings.

Herbert completed two years of high school then obtained employment at the Belmont Iron Works in Royersford. He was a member of the Junior Order of the United American Mechanics, a large organization founded in Philadelphia in 1853. He was also a member of the Sons and Daughters of Liberty Lodges, and a member of the Liberty Fire Company. Herbert attended the Spring City Methodist Church.

Herbert entered the Army on February 17, 1941, as part of Company B 111th Infantry from Phoenixville before it was mustered into active duty. He applied and was accepted into the all-volunteer Paratroops, and served with Company H, 505th Parachute Infantry Regiment, 82nd Airborne Division. The 82nd Infantry Division was reorganized and re-designated as the 82nd Airborne Division, in August 1942, the first Airborne Division of the US Army. 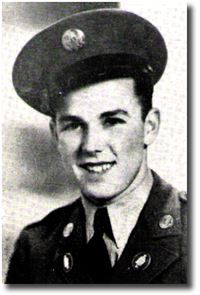 Roland was shipped overseas in December, 1943 to join the 82nd in England, preparing for the Normandy landings in France in June. The 82nd division, along with the 101st , landed behind enemy lines in Normandy the night of June 5th to secure vital bridges for the amphibious forces that were to  land on Utah and Omaha beaches the following morning. In September, Herbert’s division was involved in Operation Market Garden, a massive parachute jump into the Netherlands to capture bridges into Germany. The concept was to parachute deep behind enemy lines as an end run around the flanks of the heavily defended German lines in France. This operation was conceived by British Field Marshall Montgomery as an attempt to shorten the war. Unfortunately, the operation was a complete failure, as the bridges were too far from the supply lanes, and infantry could not break through to the bridges. The movie “A Bridge Too Far” describes a portion of this operation. It was during this operation that Herbert was killed. Corporal Herbert Roland Shenafield was Killed in Action on October 4, 1944 in Holland. His parents received the government telegram on Sunday, November 1st. Herbert was buried in a local military cemetery. After the war, his remains were returned for burial in his home country. He was returned on the Army transport Barney Kirschbaum in March, 1949. This was the ‘funeral ship’ the also return heroes Joseph A. Kacanda from Phoenixville, Fred Manship from Coatesville, and Earl Marshall from Spring City. Herbert was buried at the Zion Lutheran Cemetery in Spring City. His brother Alvin and sister Betty served in the Army during the war, Betty as a WAC. 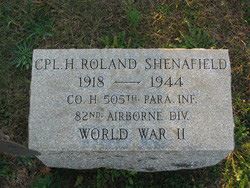