Robert J. Sabol was born on March 7,1924 to John and Caroline Sabol, who lived in Phoenixville, Pennsylvania. Robert was one of four children.

Robert enlisted in the Army Air Forces. After basic and advanced training, he was assigned to the 62nd Bomber Squadron, 39th Bomber Group Very Heavy. The 20th Air Force was divided into 20 bomb groups, each group divided into 3 squadrons with 12 – 20 aircraft. Robert's Squadron flew the B-29 Super fortress out of Guam. The group began flying combat missions against Japan on April 12th . 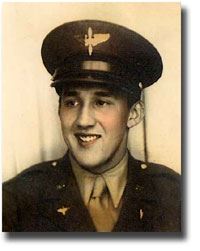 Staff Sergeant Robert J. Sabol was killed in action on May 24th, 1945 on a bombing mission over Tokyo. A description of the mission is described on the 39th.org.

On May 24, the 39th flew its first of the devastating fire raids on Tokyo. By 1:00am, dozens of fires lit up the skies and huge billows of smoke shrouded the city. The pathfinders had gone over the city to light the way. The main bombing force had just started dropping and smoke columns were rising to over 10,000 feet already. Twelve of the 34 planes bombed visually, the rest, by radar. Flak, searchlights, and several "fire-balls" plus the thermal currents made it a living hell. Frantic "May Day" calls from crippled B-29s filled the air waves. Many would be forced to ditch or abandon their planes.

The toll in B-29 losses was the heaviest to date. Twenty-six Superforts went down and at least eighty others received some degree of damage. Captain Paquette and his crew were one of those twenty-six lost that night.

Robert is honored on the Tablets of the Missing in Action at the Honolulu Memorial Cemetery, in Hawaii.