Walter J. Reber was born on June 20, 1923 and grew up in Phoenixville, Pennsylvania. He was the oldest of three children.

Pecksie was a member of the First Baptist Church. He was employed by the Boiler Construction and Supply Company in Phoenixvile.

Walter entered service in the Army and after basic training was assigned to the 88th Infantry Division. He then transitioned into the 350th Infantry Regiment, 88th Infantry “Blue Devil” Division. This is the same division that heroes William Ammon, Robert Mock, and Edward Stott served.

Between June and August, Walter’s division was in Louisiana for Army sized maneuver training that included several other divisions. Following this training, they were sent to Camp Patrick Henry in Virginia to be shipped overseas to the European Theater of Operations. 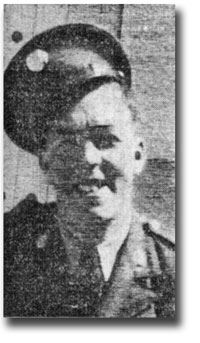 The 88th was shipped overseas in November 1942 to Casablanca. Walter’s division was sent to Italy to join the 5th Army in combat. At the end of the month, elements of the 88th Division were sent to relieve the 141st Infantry Regiment in the Casino area.  On June 4, 1944, elements of the 88th were the first to enter Rome. Other elements of the division were halted to allow Free French forces to enter Rome. In July, his parents received notice that Walter received a certificate of honor for sniping, scouting and patrolling, issued from the Fifth Army Headquarters. They also received a letter from their son:

It was some terrible place. German snipers in all the buildings but we finally routed them out and cleared the place by night.

I guess here are lots of mothers and dads who worry if their sons are in the Infantry, but when you do not hear from them, you know that we have the Germans on the run.

On December 5th, Walter was severely wounded in the area of the Castle Battaglia while on a scouting mission. He was standing at a window in a house when the Germans attacked, setting the house on fire. As he was evacuated, he shouted encouragement to his fellow soldiers. According to his commanding officer, Private Reber had no regard for danger and his coolness and courage under fire were an example to his comrades. He was awarded the Bronze Star for his actions. Walter returned to combat after he recovered. Private Walter J. Reber was Killed In Action on December 18, 1944. His parents first received notification that Walter was Missing In Action as of December 18th, but German records found later record him as Killed In Action. Walter was awarded the Bronze Star with Oak Leaf Cluster, and is remembered on the Tablets of the Missing in Action at the Florence American Cemetery at Via Cassia, Italy. His brother, John, served with the Ninth Air Forces. His uncle Harold served in Germany, another Uncle John Gubanich in the Philippines and cousin Earl served in Hawaii.