Joseph Pfuhl Jr. was born on June 23, 1921 to Joseph and Ida Pfuhl who then lived in West Chester, Pennsylvania. Joseph Jr. was the youngest of four children  His father emigrated from Yugoslavia, and worked as a butcher.

Joseph developed an early interest in aviation. Watching a plane fly overhead when he was eight years old, he turned to his father and said “Daddy, I’m going to fly a plane like that someday.” A couple years later, while visiting an uncle at Maple Shade, NJ, he made friends with aircraft mechanics at the nearby Pennsauken Field. They arranged for his first aircraft ride.  At the age of fifteen, Joseph wrote to the Navy Department asking if he could enlist in the Naval Air Corps.

Joseph graduated from West Chester High School in 1939. He was a friend and classmate of Hero Walter Bevan. 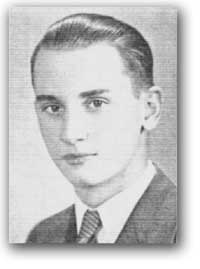 “Joe” is a popular member of the class.  His friendliness and good humor have gained him many friends.  He is fond of photography, but his chief interest lies in aviation.  He has done his part to make our class successful in every way.
We wish you a cloudless sky in which to fly, “Joe”

After graduation, Joseph worked as a freelance photographer. Joseph enlisted in the Army Air Corps on November 13, 1939. He attended the Army Air Corps Technical School at Lowry Field, Colorado; graduating as a photographer on July 5, 1940. Joseph served as a photographer and gunner on B-17 Flying Fortress bombers flying patrols in the north Atlantic Patrol Squadron, based in Newfoundland. On September 19, 1942 Joseph was appointed an Aviation Cadet, an appointment for pilot training. He received initial flight training at Langley Army Field in Virginia. This initial training was sometimes referred to as “elimination training”- weeding out those who proved they did not have the ability to learn to fly. Joseph was successful and continued his aviation training. He graduated from the Army Basic Flying School at Shaw Field, South Carolina in June, 1943.  Joseph was commissioned a Second Lieutenant on July 28, 1943, when he completed the Advanced Twin-engine Pilot Training course at Freeman Army Field, in Saymour, Indiana. Joseph received training and certification as a B-29 Co-pilot at Clovis Field, New Mexico in July, 1944. In August, he was promoted to the rank of First Lieutenant, and command pilot. Joseph was then sent to serve overseas. In September, his family received a letter, informing them he was in Africa, and was in Brazil previously. Later he sent a letter from India. Heavy bomber units headed for China, sometimes flew south to Brazil, then west to Africa, conducted additional training, then flew to India and on to China. First Lieutenant Joseph Pfuhl Jr. died Non Battle on September 27, 1944, when his B-29 crashed at an American airfield in China. His parents received notification by telegram from the War Department on October 4th. He was buried in a local Military Cemetery. After the war Joseph was returned to his home country for reburial. He was the first West Chester hero to be brought home for reburial. He was returned on the funeral ship Hondo Knot, in October, 1947. His body arrived in San Francisco and was transported by Rail Road.  Services were held at the grave site at Green Mount Cemetery. Pallbearers were World War II Veterans from West Chester, and a firing squad was provided from Company I, 111th Infantry National Guard from the town. The American Legion and VFW provided Color Guard and escort. An American Legion Bugler sounded “taps” echoed by a bugler from Joseph’s High School (“double taps”). Family and friends huddled together, and the Military guard stood at attention during a sudden deluge, the first rain in nearly a month.