“If you like Scotch jokes stop in Room 5 at noon and hear Penny tell some of his famous ones. Your laughter will be sure to mingle with ours when you join his appreciative audience. Wimpy obliges in another way, too – he’s our money lender.”

Robert married Martha in 1941 and they began their life together in Berwyn. 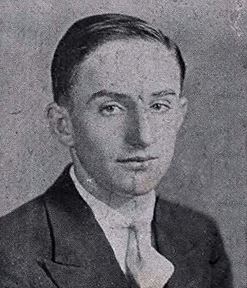 Robert entered service in the Army on April 18th 1941. After basic and advanced training he was sent to England in July, 1944. In September, he was sent to France as part of the 317th Infantry Regiment, 80th Infantry Division. The 89th Infantry division landed at Utah Beach in early August, and became the work horse of General Patton’s Third Army and played a key role in the famed 3rd Army break through German Defenses in the Avranches, Normandy, creating the Falaise Pocket and surrounding German troops. The division then staged its historic rapid advance through France to the German border, only stopping when fuel for the tanks was withheld to stop the advance so the rest of the army could catch up. First Lieutenant Robert Thomas Penlington was killed in action on September 9, 1944, one week after he was assigned to the 317th. He is buried at the Lorraine American Cemetery in S. Avold, France.