Albert D. Moses Jr. was born in October 1925 to Albert and Amelia Moses who then lived in Willistown Township. The family later moved to Uwchlan Township. Albert was the oldest of four children. Albert went to Tredyffrin-Easttown High School.

Albert entered service in the Army in October 1943. After basic and advanced training, he was shipped overseas to the European Theater in April, 1944. Albert served in the 47th "Raiders" Infantry Regiment in the 9th "Octofoil" Infantry Division. His Regiment came ashore on Normandy and advanced up the Cherbourg peninsula. The 47th Regiment was the first into Cherbourg, and first through the Siegfried Line through Belgium, into Germany. Later it was the first complete infantry regiment in the Remagen bridgehead across the Rhine into Germany. A suburban Philadelphia resident, Colonel David Pergrin, was the Commanding officer of the 291st Combat Engineering Battalion which discovered the still standing bridge, and authored a book about this story – “First Across the Rhine”.

His parents received a letter from Albert in September, 1944, informing them that he was in Belgium.  It was the last letter they would receive from him. 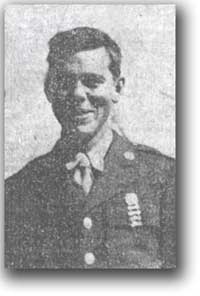 Sergeant Albert D. Moses Jr. was Killed In Action on September 22, 1944 in Germany. He is believed to be the first from Chester County who died in Germany. His parents received official notice in a telegram from the War Department on Thursday October 12th.  Albert was awarded the Distinguished Service Cross, the Nation's second highest award for valor, for his courage which led to his death. The citation reads as follows:

The Distinguished Service Cross is posthumously awarded to Sergeant Albert D. Moses, Jr. 47th Infantry, United States Army, for extraordinary heroism in action against the enemy on 22nd September, 1944, in Germany. An early morning enemy attack, preceded by an intense artillery concentration, broke through the hillside positions of Sergeant Moses’ company and threatened to envelop gun emplacements in the valley below. With his machine gun ammunition expended, Sergeant Moses voluntarily and with great personal courage, ran the gauntlet of heavy automatic weapons and small arms fire to reach the dump 150 yards away and returned with more then a thousand rounds of ammunition, thus staving off the attack. During the height of the battle his platoon leader was severely wounded and lay helpless in an exposed position. Again displaying great valor and with utter disregard for his own safety, Sergeant Moses moved across the open field though a hail of intense enemy fie to reach the wounded officer. As he prepared to carry him to a safe position, Sergeant Moses was hit by a burst of fire and instantly killed. The heroic and exemplary actions of Sergeant Moses in sacrificing his life in an attempt to rescue his wounded leader reflected the highest tradition of the Armed Forces.

The medal was awarded to Albert’s mother by Colonel W. W. Vaughan, Commanding officer of the Valley Forge General Hospital in a ceremony held on September 11th. Lt. Charles Silliman,  Albert’s Platoon Leader whom he saved, was hospitalized at Valley Forge Hospital, and was present during the ceremony. Lieutenant Silliman was from nearby Wilmington, Delaware. A memorial service was held on October 29, 1944 at the East Whiteland Presbyterian Church.  Albert was buried at the Henri Chapelle American Cemetery in Belgium with full Military Honors. Besides the Distinguished Service Cross, he received the Purple Heart with Oak Leaf Cluster (in lieu of a second Purple Heart).