Clarence E. McGirk was born in Lyndell on April 4, 1925, to Elwood and Harriet McGirk. He was one of three children.His family later moved into Downingtown. Clarence attended Downingtown schools, and later moved with his family to West Chester. Clarence worked at Jack’s Auto Supply and was a member of Camp 32, the Sons of Veterans of the Civil War.

Clarence enlisted in the Army on February 8, 1943, and received basic training at Fort Jackson, South Carolina, assigned to the 609th Engineers Light Equipage. He then received further training at Camp Gordon Georgia, and Camp Forrest Tennessee, and engaged in maneuvers at Nashville.

Clarence came home for a few days leave during Thanksgiving, 1944, before he was sent overseas December 10th. He was hospitalized with a leg injury and later discharged back to duty according to a letter received by his mother in October.

Private Clarence E. McGirk Died Non-Battle in a hospital in Paris on October 24, 1944 of a pulmonary embolism (blood clot of the lungs). His mother received the telegram from the Adjutant General of the War Department on November 7th. 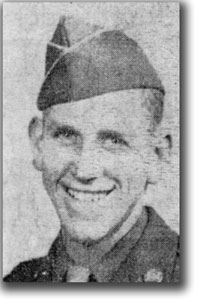 Clarence was buried in a local military cemetery in Solons, France with full military honors.  A memorial service was held at the Baptist Church in West Chester on November 19th. A full color guard from the West Chester American Legion Bernhard F. Schlegal Post No 134 was in attendance. Clarence was returned for reburial in his home country in 1948. Services were held by the Sons of Veterans of the Civil War.  He was interned in the Hopewell Cemetery.