William N. McCullough was born on September 19, 1909 to William and Bertha McCullough who lived in Montgomery County, Pennsylvania. The family later moved to Spring City. William was one of nine siblings.

William entered the Army on November 8, 1942. After basic training he was shipped overseas in November 1943 to the European Theater of Operations and was assigned to the 121st Infantry Regiment, 8th Infantry Division. This is the same division, albeit a different regiment, that Hero John Green served.

The 8th Division, also known as the "Golden Arrow", or "Pathfinder" Division, landed on Utah Beach at Normandy, France on July 4, 1944 (the original landings in Normandy were on June 6th) . They aided the effort to liberate the town of St. Lo and break out from the Beachhead, around the 18th 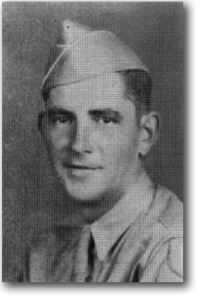 Private First Class William N. McCullough was killed in action on July 19, 1944. He was buried at a local military cemetery, Saint-Laurent-sur-Mer at Normandy. After the war at the request of his family, his body was returned aboard the transport John L. McCarley with 2,553 of his deceased brothers in arms. The funeral was held at the Nelson Funeral Home on April 24, 1948. Interment occurred at the East Vincent Mennonite Cemetery.  William was buried next to his father.