William H. McAllister was born in 1921 to George and Adda McAllister of Marshallton, Pennsylvania. William was the youngest of six children. His father operated a large farm near Marshallton. William graduated from the West Chester High School, Class of 1939. He played baseball for the Exton Crossroads Baseball Club.

William enlisted on December 3, 1942 and attended the Army Signal Corps School in Philadelphia. He was then sworn in to service in August, 1943. William received training at Camp Meade, Maryland, Camp Crowder, Missouri, and Fort Monmouth, New Jersey. He was shipped overseas to the European Theater of Operations the last week of May and stationed at an Army Replacement Center in England. Army Replacement Centers were camps from which troops were pulled to be sent to combat units to replace casualties. William was sent to Normandy France after the initial landings on D-Day (June 6th). He was assigned to the 101st Infantry, 26th Division.

A letter to his parents dated Thanksgiving Day, was the first indication that he was in combat.

Private William McAllister was Killed In Action on November 28, 1944 in France. 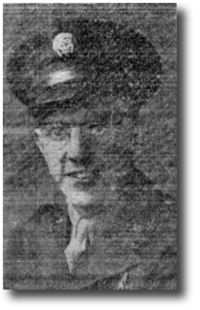 Corporal S. Harry Perdue of Marshallton was serving in New Guinea when he received the news of his friend’s death. He wrote the following poem to honor William:
Our dear God has called from the battle line
Unto the heavenly home above.
Our Bradford soldier, ever so fine,
Whom all thought of with kindly love.
With his passing, we find an empty space
Which he bravely held and defended.
Another soldier has taken his place
When God said: “Your work has ended.”
When victory is won and the war is over,
And the battles go down in history;
We will still think of Billy,
As we look out over the Bradford clover.
William's parents received the telegram from the government on Saturday, December the 9th. William was buried at a local military cemetery in Limey, a province of Lorraine, France. After the war, William’s remains were returned for burial in his home country. Services were held at the Hicks Funeral Home on September 14, 1948. Interment was at the Bradford Cemetery.