Fred B. Manship Jr. was born on October 23, 1923 to Fred and Katherine Miller Manship, who resided in Coatesville, Pennsylvania. Fred Jr. was one of two children. Fred graduated from S. Horace Scott High School in 1941, where he played on the Varsity basketball team.

Fred joined the Army Air forces on May 15, 1943. He went to Fort Meade, Maryland for basic training where he was trained as a gunner and radio operator to serve on B-17 Flying Fortresses. This involved training at 10 different camps over a period of several months including Keesler Field, Mississippi, Sioux City, Iowa, Gowen Field, Boise Idaho, Walla Walla, Washington. At Gowen Field he received his gunner’s wings and was promoted from Corporal to Sergeant, and then promoted to Staff Sergeant while at Sioux City.

Fred was then sent overseas to North Africa to serve with the 12th Air Force early in 1942. He was the Radio Operator and a gunner on a B-17 named the "The Warrior". 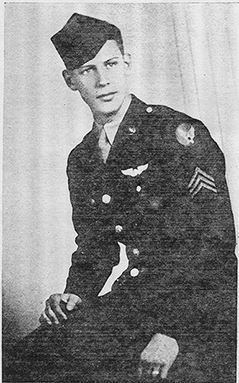 On May 25th, his aircraft and crew were scheduled for a well deserved day off, and one of the bombers scheduled for a mission was short a gunner. Fred volunteered for the mission as a waist gunner on a mission to bomb Messina, Sicily. On this mission, Fred’s plane was heavily damaged with one of the four engines shot out. The aircraft was last seen going down over the target. The pilot managed to gain control just above the water. Nine enemy fighters followed the lone aircraft. Three were shot down, including one downed by Fred, before the remaining enemies broke off the attack. Soon the crew jettisoned all the guns and ammunition, to lighten the heavily damaged aircraft.
An ME-210 enemy fighter found the crippled aircraft and attacked. Finding no return gunfire (as the guns where thrown overboard) the aircraft made 15 passes firing into the B-17. Fred was wounded in the back by a 20mm shell from the attacker. He was badly injured and crew members who administered first aid said "he made no complaints at all". Remarkably, no one else on the ship was hit. The B-17 finally reached Tunis, and Fred was rushed to the British hospital. Staff Sergeant Fred Manship Jr. died two days later on May 27, 1943, after his 20th combat mission. He was the first to be buried in the new American Military Cemetery at Tunis. In early June his family received a telegram that Fred was Missing In Action, followed by a telegram that he was Wounded In Action. On June 16th, the family received the final telegram informing them that Fred was Killed In Action. Fred was posthumously awarded the Purple Heart, Army Air Force Citation of Valor, and his third Oak Leaf Cluster to his Air Medal. Fred’s body was returned to his home country along with the remains of 2,530 Americans aboard the US Army Transport Barney Kirschbaum in May, 1948. A private funeral was held on June 5th at the Fairview Cemetery.