James J. Manning was born on August 21,1924 to James and Ida Hatfield Manning who lived in Middletown, Delaware. He was the youngest son of four children. His parents later moved to Coatesville. James' father passed away when he was a teenager and his family moved in with a family friend.

James attended the Lafayette school, and after school was employed as a truck driver. He then left to work at Lukens Steel as a crane operator. .

James enlisted in the Army on May 7, 1943, and received basic training at Camp Shelby, Mississippi. He was shipped to the European Theater, to North Africa in November. He was assigned to the 168th Regiment,  34th Infantry Division in Marc Clarks famed 5th Army, the same division that Hero Francis Lyons served. James’ regiment landed at the Anzio beachead in March. His last letter home, written from the Beachhead, James wrote: “This sure is a hot place, but we boys never complain.” 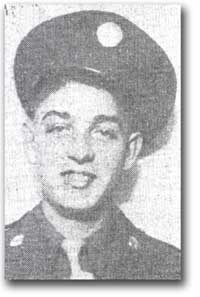 Private First Class James J. Manning Jr. was Killed In Action on May 30, 1944 in Anzio, Italy. On June 21st, his mother, Ida, received a telegram that James was Missing In Action. She later received word that James was Killed In Action. James was buried locally in the US Cemetery in Nuttuno, Italy.  After the war, he was disinterred for burial in his home country. Funeral services were held at the Archie S. Maclean’s Funeral Home. Members of the Sahler-Sedan VFW Post in Coatesville, served as pallbearers and rendered military honors. James was buried at the Fairview Cemetery on August 7, 1948, with full military honors.