Edward W. Hinkle was born April 1, 1921 to William and Stella Hinkle who lived in Phoenixville, Pennsylvania. He was the oldest of three children. Edward graduated from Phoenixville High School in 1940.

Ed married Velma Lear and worked as a welder at Phoenixville Steel.

Ed entered the Army on July 11, 1945.  After basic training at Camp Robinson, Arkansas, he was transferred to Fort Benning, Georgia. In July, he was sent overseas and joined Company L (Lima Company), of the 16th Infantry Regiment, 1st Infantry Division.  His unit was part of the Occupation Forces in Germany. 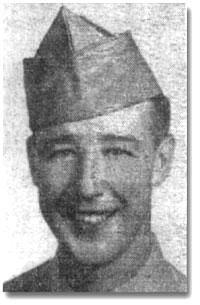 In September, the Associated Press reported that Edward was found dead in the barracks from a self-inflicted rifle shot. His wife, Velma, had not yet received notification about her husband and sent an urgent telegraph to Germany seeking information. She had just received a letter from Edward on the 16th, written in good spirits, in which he asked for current pictures of her and their two year old daughter. Private First Class Edward W. Hinkle died on September 17, 1946, in Weilburg, Germany.  He is buried at the Green Tree Cemetery in Oaks.