Ernest James Gere was born on October 2, 1920 in Phoenixville, Pennsylvania. His father was a steelworker at a Phoenxiville Steel Company. Ernest was the youngest of seven children. Ernest graduated from Phoenixville High School in 1938. He was a well-known athlete during his school years, participating in all schools sports. The Yearbook records of Ernest:

“He loves to laugh, to laugh is life, That’s why he laughs with all his might.” “Ernie” is an all-around athlete. He made All-suburban football team, playing end. Ernie’s ambition is to be a physical education teacher.

Ernest was a member of St. John’s Reformed Church. He worked part-time at the West Company during his high school years. Ernest attended West Chester State Teachers College where he received a medal for high jumping, and later Ursinus College.  He later worked for B.F. Goodrich Company in Oaks.Waco CG-4A wooden Glider. 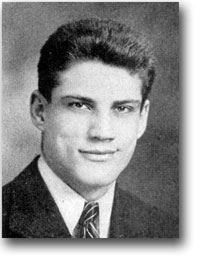 Ernest  enlisted in the Army on July 16, 1942. He received basic training at Camp Forrest, Tennessee where he won a trophy as boxing champion of the camp. Ernest volunteered for the glider troops, and was assigned to Company B, 1st Battalion, 327th Glider Infantry Regiment, 101st Airborne Division. Glider troops were part of the Airborne Divisions and were carried into battle by Waco CG-4A wooden Glider (pictured at right)  towed behind C-47 (military version of the venerable DC-3). The concept was to increase the number of troops and equipment each C-47 could deliver. Gliders were released over the target area, to “land” (actually a controlled crash as they had no landing gear). These were wooden framed and fabric covered aircraft. When they came in for a landing, the command to ‘Raise Feet’ was given – troops held up their legs by holding their knees. When landing on unprepared runways, many times the bottom of the aircraft would be damaged by rocks or brush, fences, tearing the bottom, and could injure anyone whose feet were resting on the floor. Gliders were often a risky means of transporting the troops thus they were all volunteers.  The 327th Regiment left for England in November, 1943, for further training and to prepare for the Liberation of France.Ernest’s regiment glided into France behind enemy lines at Utah beach in the darkness before our troops landed on D-Day in France. This was especially hazardous, landing at night in a relatively unknown area – and there were no night vision goggles. Many troops were injured or killed as gliders hit stone walls, trees, boulders. Their mission was to move into the Carentan to cut off German retreat and as well as reinforcements – behind enemy lines. In September, Ernest’s unit was involved in Operation Market Garden, a massive parachute jump into the Netherlands to capture bridges into Germany. The concept was to parachute deep behind enemy lines as an end run around the flanks of the heavily defended German lines in France. This operation was conceived by British Field Marshall Montgomery as an attempt to shorten the war. Unfortunately, the operation was a complete failure, as the bridges were too far from the supply lines, and infantry could not break through to the bridges. The movie “A Bridge Too Far” describes a portion of this operation. Market Garden began on September 17th and was the largest Parachute drop in history, involving nearly 35,000 American, British and Polish Airborne Troops.  Sergeant Ernest James Gere was Killed In Action on September 19, 1944, in Belgium. He was buried at the Ardennes American Cemetery in Neupre, Belgium. Memorial Services were held at the Hungarian Reformed Church on October 8, 1944. A portion of his eulogy is recorded below :


Man is responsible for War. God in his infinite love gave free will to man to choose between good and evil and until man learns how to choose, we will have war. Thank God we have men who are willing to fight for the principles of equality, so that men everywhere might worship according to the dictates of their own consciences.  America will be a better place because brave men like Ernest Gere have lived. We must resolve that they shall not have died in vain."