Dominic Anthony Gelormo was born in 1923 to Patsy and Jennie Gelormo who lived in Paoli, Pennsylvania. Dominic was the youngest of seven children.

Dominic attended Tredyffrin Easttown High School. He was also a member of the Berwyn Boys Club.

After high school, Dominic worked for the Benjamin C. Betner Company in Devon. The company made paper bags for 65 years until it closed in the early 1990’s. 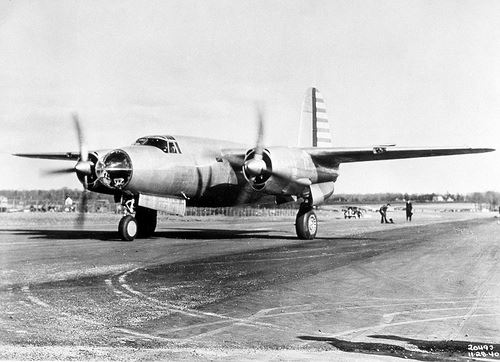 Dominic entered the Army Air Forces on February 1, 1943. He completed training and became a radio operator/gunner on B-26 Marauder medium bombers. Dominic was shipped over to England and was assigned to the 558th Bomber Squadron, 387th Bomber Group, Medium. Staff Sergeant Dominic Anthony Gelormo was Killed In Action on June 15, 1944 over the English Channel. His crew was en route from AAF station 162, located at Chipping Ongar, Essex, England, and were on a mission to bomb Villers-Bocage in Normandy, France. The Missing Air Crew report of his B-26B includes the following witness statement:

“I was flying as tail gunner on aircraft no 41-31669 on 15 June 1944. Our plane was hit by a burst of enemy flak over the target and the right engine was knocked out and the pilot, Lt. McHenry, attempted to bring the ship back on the single left engine.  About 4 or 5 miles from the English coast the good engine started cutting out so we were forced to ditch.The engineer gunner, Sgt Malash, and I managed to get out and release the big dingy just before the plane sank. The plane remained afloat about 45 seconds but neither Sgt Malash nor myself saw any of the other three crew members at any time after the plane hit.  After about a half hour in the water, we were picked up by a British destroyer, then on patrol duty, and returned to shore about 12 hours later….”

Dominic is remembered on the Tablets of the Missing at the Cambridge American Cemetery in England.  His brothers, Joseph, Arthur and Louis also served during the war.