James Paul Frank was born on July 31, 1921, to Norman and Sara Frank; who lived on their dairy farm in East Bradford Township, Pennsylvania. (His sister lives there today). Frank was one of six children.

James, who preferred to be called by his middle name, Paul, graduated from West Chester High School in 1939. After graduation, Paul worked at Eachus Dairies. He was well-regarded by those who knew him.

Paul enlisted in the Army on July 20, 1942. After basic training, he was assigned to the 317th Infantry Regiment of the 80th “Blue Ridge” Infantry Division. When Colonel Jim Hayes, was assigned to G Company of the Regiment, he remembers Paul, "In short order, I learned that he was one of my better soldiers and when I was assigned as Company Commander in November, I promoted him to sergeant."

Paul’s unit trained for two years before being sent overseas to the European Theater on July 1, 1944, and entered combat during August in France. Paul was moved to Company E as platoon sergeant. His division was the one used to exploit the breakthrough at Avranche. This resulted in fierce fighting and very heavy casualties. 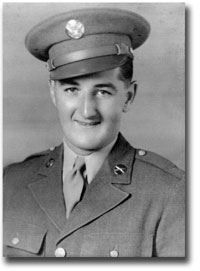 In October, G company captured the small town of Sivry, and came under intense counterattacks. E company was sent to help, but the Company Commander was seriously wounded. Colonel Hayes, who was appointed as Commander of 2nd Battalion (companies E, F, G, and H) writes:

I came forward to try to get the company moving and found that the only officer in line of command was in no condition to take command so I relieved him on the spot. This left the company leaderless so I led it forward to the edge of Sivry where we came under severe machine gun and artillery fire.  As I ran around trying to get people moving I came across Sergeant Frank and he and I joined in destroying a machine gun nest...I  recognized immediately that Sergeant Frank was capable of taking command of the company, so I promoted him to 2nd Lieutenant on the spot ( and under severe artillery fire, I might add)  As he took command, I gradually withdrew my command group in order to get on with the problem of commanding the entire battalion and not just one part of it.”

The next day, the Company received new replacements, including a 2nd Lieutenant and Paul had to relinquish command of the Company. Paul was wounded three times, and was evacuated to England for hospitalization. He returned to his unit after three weeks. On March 27th the Regiment was in Mainz, Germany in preparation of crossing the Rhine River. The senior command decided not to prepare the crossing with a preparatory artillery barrage. The terrain offered little cover, and there was a full moon that evening. Lieutenant James Paul Frank was Killed In Action while crossing the Rhine on March 28, 1945. He was buried locally at the US Military Cemetery at Hamm, Luxembourg. Paul’s remains were brought home in 1949. Funeral services at the Hicks Funeral Home in West Chester on April 27th, 1949. Reverend Jacob Ashton Winterstein of the Church of the Holy Trinity conducted the services. Paul was buried with full military honors at the Unionville Cemetery. In 1949, Emily Lewis, a former teacher at Copeland School, planted a beech tree on the grounds of the Copeland School as a memorial to Paul. Today at the base of this large tree there is a bronze plaque on a natural stone to Paul’s memory.