Joseph J. Cozzone was born on June 4, 1921 and grew up in Downingtown, Pennsylvania. His parents imigrated from Italy. He was the oldest of six children. His mother passed away when Joseph was young.

Joseph graduated from Downingtown high school and then worked at the Downingtown Manufacturing Company.

Joseph returned home on his only furlough in July, 194 and was then shipped overseas and assigned to serve with the 329th Bombardment Squadron of the 93rd Bombardment Group, (part of the Eighth Air Force, 2nd Bombardment division, 20th Combat Bombardment Wing). The 329th was stationed at Hardwick Airfield in southern England. 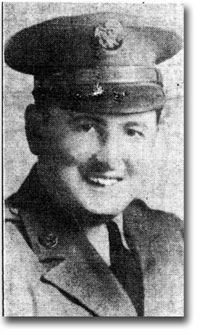 Staff Sergeant Joseph J. Cozzone was killed in action on November 13, 1943 on a mission over Germany. His Father received a telegram from the War Department on November 26th informing them that their son was Missing In Action over Germany. They still held hope that Joseph would be found alive. His family and many friends had just received Christmas cards from Joseph postmarked November 9th. In late May, 1944, Joseph's family received a letter from the War Department stating that Joseph was killed in Germany. He was returned to his home country for final burial in November, 1950. and was buried with full military honors. Joseph’s brother, Andrew also served in World War II with the Marine Corps in the South Pacific.