Joseph Benson Campbell was born on May 6, 1911 to Professor Willard S. and Eva Campbell of West Pikeland.

Joseph graduated from Phoenixville High School in 1928 and married Dorothy Patton in December, 1939. Living in Phoenixville, he was employed by the Goodrich Tire Manufacturing Company.

Joseph was a Private First Class and served with Company C, First Battalion, 117 Infantry, 30th Division in the European Theater (Rhineland and Ardennes). He was awarded the Combat Infantry Badge and the Purple Heart. The 30th Division went ashore at Omaha Beach June 10th to reinforce the 29th Division which had experienced heavy casualties on D-Day, June 6, 1944. The Division participated in the drive across France to Belgium. Joseph was assigned as a replacement to Company C, First Battalion, 117 Infantry, of the 30th Division in September. 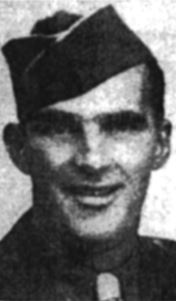 The 117th Regiment traveled 128 miles by truck on September 4th, to keep up with the spearhead entering Belgium at Tournai. The 30th was the first American division to enter Belgium. They received a joyous welcome celebrating their liberation. Often, the towns went wild at the sight of the allied liberators. Belgium still remembers, and celebrates their liberation each year.  Joseph’s regiment was stationed near the famous Waterloo Battlefield southwest of Brussels, Belgium. They then motored 90 miles east-northeast to the Ceroux-Moustie area, where they ran out of fuel and continued continued on foot for 64 miles until they arrived at Houtain-Saint Simeon three days later on September 10th.  The 117th Regiment encountered little enemy opposition until they they broke though the German defensive lines and entered Holland on September 13th in the Maastricht area. The attack on the Siegfried line began on October 2nd, from Scherpenzeel, Holland, crossing the Worm River. The well coordinated attack, with support of the 29th Division, struggled through the German Defenses, and encircling the city of Aachen on October 28th. Their lines were stretched thin, and on December 16th, the Germans took full advantage with a massive surprise attack named the Battle of the Bulge – pushing back allied forces forming a deep bulge in our lines. The battle, which lasted into the end of January, resulted in 19,000 Americans killed and 23,000 captured. Both the Germans and the Americans each suffered 84,000 casualties, including wounded. The 30th Division was pulled back, and redirected to counter the German attack. Joseph’s 117th Regiment was moved to reinforce Malmedy against a Panzer Armored Division.  The 30th Division fought against a number of enemy divisions, including the famed German Elite 1st SS Division, Hitler’s favorite. The infamous German radio announcer, Axis Sally, broadcasted "The fanatical 30th Division, Roosevelt's SS Troops, are in route to the rescue, but this time it will be completely annihilated". They were not annihilated, although they suffered heavy casualties. Joseph was one of them. Joseph had been in the service for one year and had been overseas for four months when he was killed in action on January 16, 1945 in Belgium. He was buried in the Henri-Chapelle American Cemetery in Belgium.  In 1948 on the USS Carroll Victory, Joseph's remains were brought home, along with the remains of 7,571 soldiers. He is buried in the  Baltimore National Cemetery in Baltimore, Maryland.

Joseph had two brothers in the service:  Willard S. Campbell Jr., a Radio Technician First Class, and Theodore R. Campbell, a Motor Mechanics’ Mate in the Navy. He also had two brothers-in-law in the service, Corporal Ray Wilmer, on the Luzon, and Corporal Samuel H. Lengel, located on the West Coast. In addition, he had 5 sisters and two other brothers.