Jerry Bove  was born in Avondale on March 5, 1909. His parents were Vincenzo and Mary Bucci Bove. His father was a stonecutter. Jerry was one of 13 siblings. Jerry attended Avondale Elementary School and then went to work to help support his family, as many did during the Depression. He had several jobs, but principally worked in the mushroom industry.

Jerry’s family and friends called him “Jake”. He enjoyed playing cards, as well as outdoor activities such as swimming, target shooting, trapping, and deep-sea fishing. He never married, but enjoyed the company of many girls. Jerry was remembered as a kind, gentle, man, with a jovial personality.Jerry purchased a used 1938 Buick convertible of which he was especially fond.

Jerry was drafted into the Army in 1942 and sent to Fort Benning, Georgia for basic training. He was then sent overseas and participated in the invasion against the Axis forces in North Africa, 41st Armored Infantry Regiment, 2nd Armored division. He participated in the invasion of Sicily. Jerry later landed at Normandy in France, and continued on io Belgium. His division took the Albert Canal on September 8th -  a strategic canal between the port of Antwerp and Liege, connecting the Meuse and Scheldt rivers.

The division then successfully fought to cross into Germany north of Schimmert. Jerry was a seasoned soldier with two years of combat under his belt, but during this battle, on September 17th, he was mortally wounded by shrapnel.

A memorial service was held in Avondale on March 26, 1949 followed by Mass at the Church of the Assumption BVM in West Grove. Jerry Bove was buried at St. Mary's Cemetery with full military honors rendered by the William H. Fahey Post No. 491 of Kennett Square. Jerry was awarded the Purple Heart, and European Theater medals. His Brother, Leon also served during War II, as well as several nieces and nephews. 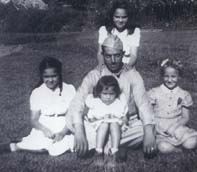