Howard Stanley Baldwin was born on January 19, 1924 to George and Eva Baldwin who lived in Spring City. He had eleven siblings. Howard attended the Salem School and later worked at the Royersford Foundry and Machine Company, where his father worked.

Howard entered the Army in May, 1943.  After basic training he was shipped to the European Theater of Operations and was in North Africa on Thanksgiving Day. Howard was assigned to serve with the 179th Infantry Regiment, 45th Infantry Division, the  “Thunderbird Division”. The Thunderbird Division saw heavy combat in Sicily, Sareno, Anzio and Southern France.

Private First Class Howard Stanley Baldwin was "Killed In Action" on June 1, 1944 in Italy. During a firefight, his brother Wilbur told him to stay down, but he looked up to fire at the enemy and was shot. He died in his brother Wilbur’s’ arms. 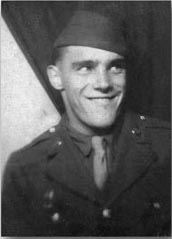 Howard is buried at the Sicily-Rome American Cemetery, Italy. His brother, George, arrived home on leave from the Navy in late June where he then learned of his brother’s death. Two other brothers served during the War:  Master Sergeant Liewellyn F., who was then stationed in Florida and Wilbur Earl (mentioned above) in Italy.