Melvyn Evans Bailey was born December 15, 1913. He was the son of George and Marguerite Bailey and grew up in Landenberg. He had five brothers and eight sisters. Melvyn was often called by his middle name, Evans. He was a member of the first graduating class at Kennett Consolidated High School in 1932. After graduation, Evans attended Goldey Business College (now Goldey-Beacom College). He was later employed as an agent with New York Life Insurance Company.

In January 1941, Evans was among the first group from Chester County drafted into the Army during an unprecedented peacetime draft. (The Selective Training and Service Act of 1940) He received basic training at Camp Devens, MA and advanced training at Fort Drum, NY. He participated in maneuvers in the Mojave Desert.

Evans was sent overseas in 1943 and served with the 4th Armored division. He received further training in England. 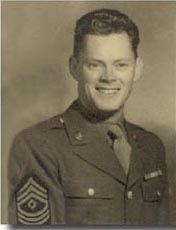 He was killed on November 25, 1944 during the Battle of Metz. At that time, he was a tank commander and first Sergeant of Company B, 8th Tank Battalion of the 4th Armored Division in the Third Army. He received five Bronze Stars, a Silver Star and a Purple Heart. He had been recommended for a battlefield commission as a 2nd lieutenant but was killed before he was promoted.

Evans is buried in Union Hill Cemetery in Kennett Square. Two  of Evans' sisters - Phyllis and Bernice, were Army Nurses during World War II. Two brothers also served during the war: Charles, in Europe with the Army Engineers and Rodger, in the Army Air Corps in the Pacific. Three brothers-in laws were also in the Army during the war. An older brother, Calvin, served in the Army prior to the war, and a younger brother Paul, joined the Army later.