Joseph George  Arvay was born on March 18, 1922 to Joseph and Anna Arvay who lived in Coatesville, Chester County. Joseph was the second of four children. Both of his parents emigrated from Czechoslovakia in 1914.

Joseph enlisted in the Army on October 6, 1942. He served with Company G, 349th Infantry Regiment of the 88th Infantry Division

Joseph’s unit served as extras in a "Hollywood" move/documentary, Tunisian Victory. Joseph's refers to the movie in a letter he wrote home that was later published in the Coatesville Record:

Boy, I bet you never had expected to see me or hear that I am in Hollywood now.  Well I am. Our company of two hundred men left last Friday morning by trucks and got to Hollywood on Friday night. We are going to make a war picture of the lst victory in North Africa. The name of the picture is Tunisia Hill 609. It is going to be one of the best war pictures ever produced by Hollywood. The director is Frank Capra. I’m sure you have heard of him before.

We are not allowed to take a shave or get a hair cut for 15 days and you ought to see my beard now. We are going to start on the picture tomorrow afternoon. After we complete it we are going to Hollywood to spend five days free. That surely is going to be THE time.

Our Company is getting $1,800 for the company fund, which we are going to use when we get back to the base camp to buy furniture for our day room.

We have half our company dressed as German soldiers. We are using live bullets and big 155mm guns – ten-inch guns, and all kinds of army planes and tanks. We will blow up tanks which are made of canvass but look real. Walter Main, from Downingtown, is here with me in the picture. He said he is going to tell his wife so she would put in the Coatesville Record.

Joseph’s unit was set overseas in December, 1943. During a drive to liberate Rome on June 7th, Joseph was as hit by shrapnel in the arm and leg and was evacuated to a hospital. He returned to duty after his recovery.

Joseph's parents received a telegram stating that their only son was "Killed in Action" on October 26, 1944. 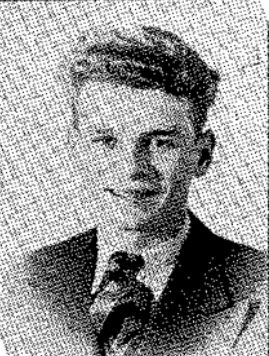