William F. Ammon was born in Downingtown, Pennsylvania on April 15, 1927. Bill was the 6th of 11 children of James and Esther Hall Ammon.  All of Bill's brothers served in the armed forces, some of them during World War II.

Bill was drafted into the Army on May 1, 1945. After training, he was sent overseas on October 12, 1944 and was stationed in Italy with the 88th Infantry division during his entire service.

At the time of his death, Bill was only 18 years old. He died in Cortina, Italy on December 24,1945 from injuries received in a motor vehicle accident. His wife received the following telegram informing her of Bill's death:

The Secretary of War has asked me to express his deep regret that your husband Pvt. Ammon, William F., died in Italy 24 December 45 as a result of a vehicle accident. Confirming letter follows
E.F. Witsell, acting Adjutant General.

Bill was initially buried in the US military cemetery in Mirandola, Italy. In 1949, his body was shipped home where he was given a full military burial at Brandywine Manor Cemetery. 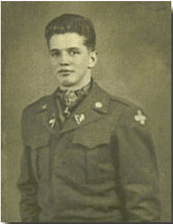 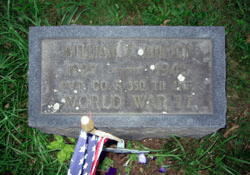