Richard J. Adam was born on May 29, 1915 in Merchantville, New Jersey. He was one of six children.
In 1933, the family moved to West Chester, Pennsylvania to operate the Red Maples Farm.

After Pearl Harbor, Richard and his brother gave up farming, sold their dairy equipment, and enlisted, even though they could easily have obtained an exemption from the draft as farm workers. Richard enlisted in the Army Air Forces, Robert in the Navy.

Richard began training in March, 1942. In January, 1944 he married Bette Dowdell in Tonapah, Nevada, where he was stationed.

Richard was sent overseas to the European Theater of Operations to North Africa in March, 1944. He was a ‘belly’ ball turret gunner in a B-17 bomber, one of the most dangerous positions on the aircraft.  Richard flew 30 missions. His unit was moved to newly liberated bases in Italy in May, 1944 where he met up with his brother-in-law, Corporal Cotter, who was also stationed in Italy. On May 29th during a mission over Austria, Richard's bomber was heavily hit by flak (anti aircraft fire) and the aircraft exploded. Originally he was listed as missing. Of the ten crew members who parachuted out of the burning aircraft, five were rescued by partisan forces, two were captured, and two were killed.  Richard’s fate was initially unknown. His wife received notice that he was missing, but several months later, his status was changed to "killed in action" on October 10, 1944. In June 1949, Richard and a fellow crew member were returned to their home country for burial at the Woodlawn National Cemetery in Elmira, New York. Richard was buried with full military honors. 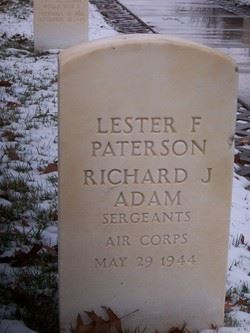