Gene Smedley McMullen was born on December 13, 1942 to Robert (Rick) and Frances McMullen, who resided in West Chester, Pennsylvania. Both Rick and Frances were graduates of West Chester State Teachers College. Gene was one of two children.

The same year he was born, Gene's father enlisted in the Marine Corps. He was sent to the Mediterranean, and Gene went to live with his grandmother in West Grove. When his father returned he was assigned to duty in California, then to Hawaii. Gene attended high school at the Punahou Academy in Honolulu, where he lettered in Football, Basketball and Track.

Gene was well rounded in his interests; he loved music and dancing, as well as sports. He had a quiet demeanor, but was personable, and popular with his classmates. Gene worked summer jobs in construction. His father gave him a 1955 Ford convertible, to drive to work. He was proud of the car, and took it with him when he later returned stateside. 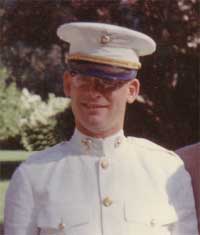 Gene graduated from Punahou Academy in 1958, and returned east to attend Penn State, at the main campus at State College, PA. He majored in history, and planned on returning to Hawaii to teach and coach high school football after his service.  At Penn State, Gene played on the varsity football team under coach Rip Engle. He joined Phi Beta Kappa Fraternity. Gene enrolled in the NROTC (Navy Reserve Officers Training Course) and their PLC (Platoon Leaders Course) preparing to enter the Marine Corps. He trained at Quantico, Virginia. He was nicknamed ‘Long-Gene’ by his family because of his height 6'3". Upon graduation from Penn State 1965, Gene went through basic training at Quantico, and was commissioned as a Second Lieutenant in the Marine Corps Reserve. Gene played on the 1965 Quantico football team. That year he married Eleanor Madore of Bedford, PA. Gene was sent to the Army’s Artillery school at Fort Sill Okalahoma, and further training at Camp Pendleton, California. In May 1966 he was sent to Vietnam, as a platoon leader with the Third Battalion of the 12th Marine Regiment. Gene’s job was a forward artillery observer, an extremely dangerous job.   Second Lieutenant Gene Smedley McMullen was Killed In Action on July 16, 1966 by Viet Cong counter battery fire in the Quang Tri Province. Gene was buried with full military honors in Arlington National Cemetery. He was awarded the National Defense Service Medal, Vietnam Service Medal, Vietnam Campaign Ribbon, and the Purple Heart. In May 2002,  Gene’s father, Rick served in WWII, Korea and Vietnam in the Corps. He served with the Second Division, later with the 1st, and then went to Navy flight school, flying fighter aircraft, later transitioning to jet fighters. 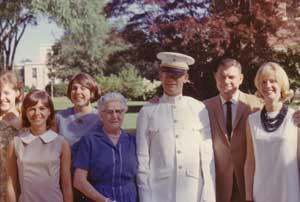