The Coatesville Record, posted the following story on May 25, 1967:

A 1965 Scott High School graduate, selected to the All-Ches-Mont League football team, was killed Saturday in Vietnam while serving with the US Marines.

PFC David Earl Hartsoe, who celebrated his 20th birthday March 24 while fighting in Vietnam, was with the 3d Marine Division which was moved up last week into the Demilitarized Zone between North and South Vietnam.

His parents, Earl D. and Mary F. Dixon Hartsoe of 324 Walnut St., learned of their son's death Tuesday from a Marine Chaplain and another Marine official from Delaware, who visited them. 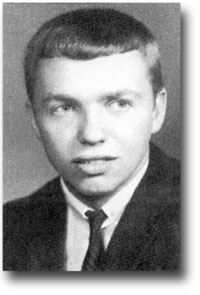 MACHINE GUNNER PFC Hartsoe was a machine gunner. He had been in Vietnam since November, 1966, except for a brief rest and recuperation leave to Okinawa this year. He returned to Vietnam Feb 20. Heavy fighting in the DMZ resumed last Thursday. Through Saturday, the Marines reported 36 men killed and 290 wounded. The Marines were under furious howitzer fire Saturday. It is not known if PFC Hartsoe was with the first group of about 10,000 Marines and Vietnamese regulars in the DMZ or if he was with the battalion that was airlifted in Saturday.
WITH 3d MARINE DIVISION
PFC Hartsoe had been with the 3d Marine Division in the Dong Ha area. PFC Hartsoe received the NAACP award during commencement at Scott High. A six-footer, weighting about 185 pounds, he played center with the Ches-Mont championship Scott team in 1964. He played on offense only due to a knee injury he had sustained the year before. However he was selected to the all C-M second team for his performance. He attended Lycoming College and earned a football letter during his freshman year. He enlisted in the Marines for three years on May 16, 1966 near the end of his second semester at Lycoming, took basic training at Parris Island, S.C., and advanced combat training at Camp Lejeune, N.C. VOLUNTEERED FOR VIETNAM
"He volunteered for Vietnam," the Marine's brother Richard G., a senior at Scott High School, said. "He could have had his choice but he wanted to go," he continued. Neither of his parents cared to comment, other than to say "he didn't complain about the situation in Vietnam." Mrs. Hartsoe said the family received the last letter from her son May 4. "If his letters were short, he'd apologize. He just wanted to tell us he was all right," she stated. "We were always proud of him. We are still proud of him, but I don't think you have to tell your readers this. They know he gave his life for his country," she commented, adding, "and you shouldn't print this. They know." WON ESSAY CONTEST The family moved to this area in 1963, first to Sadsburyville, then to the Walnut Street address. Prior to that they lived in Lancaster County where David attended school. As a seventh grader he won an American Legion essay award first place based on the theme, "What the American Flag Means to Me." He was born in Jefferson, N.C., but moved to Maryland at about five months with his family and then to Lancaster County. Besides his parents and his brother, he is survived by a sister, Susan M., a ninth grader at Gordon Junior High School; also his maternal grandmother, Mrs. Clara A. Dixon. He was a member of the Nottingham Presbyterian Church. His grandmother added, "He believed in his religion. He was faithful." REMEMBERANCE  A fellow student from Lycoming College, Steve Smith, posted a remembrance of David on the Virtual Wall:  David Hartsoe and I were both freshman at Lycoming College in Williamsport, Pennsylvania in 1965, when I photographed him in his football uniform for the public relations department. We got to know each other casually, getting together from time to time over that first difficult year. We drifted apart as sophomores, then I lost track of him. In 1968, shortly after final exams were finished, a letter appeared on the cafeteria bulletin board. Addressed to the student body, it was from David Hartsoe's parents in Coatesville, Pennsylvania. They wrote to tell us that after David left Lycoming he enlisted in the Marines. Completing his training, he was sent to Vietnam as a PFC in the artillery. Shortly after arriving in-country, during a fierce fire fight, David Hartsoe was killed in action. I was overwhelmed with sadness when I read their letter. Normally hundreds of students passed by that bulletin board every day. But that week there were only a handful of us around. We were the only ones who ever knew of David's death. That was the saddest thing of all. You'll find him in the 1966 Lycoming College Yearbook. He's in the football team picture, row 6, fifth from the left, face partially hidden, his name misspelled. Over the past four decades I've made an effort to remember David Hartsoe. My memory is now hazy. But I try to picture him in my mind's eye; try to recall our friendship, as fleeting as it was; try to do all these things so that the memory of this person I knew, and who left us so quickly, would live on. Now I pass this memory on to you all - perhaps finally achieving what David Hartsoe's parents wanted their letter to accomplish in 1968. ________________________________________  For his Gallantry, David was awarded the Navy Cross, our Nations second highest award for Valor. The citation  reads:

U.S.Marine Corps
Co. L, 3rd Bn., 9th Marines, 3rd Marine Division
Date of Action:  May 20, 1967
The Navy Cross is awarded to Private First Class David E. Hartsoe, United States Marine Corps, for extraordinary heroism while serving as a Machine Gunner with Company L,
Third Battalion, Ninth Marines, Third Marine Division (Reinforced) in the Republic of
Vietnam on the evening of 20 May 1967. Company L was moving to bring a relief force to an embattled sister company when it engaged a strong enemy blocking force. Private First Class Hartsoe volunteered as point man to lead the company through the darkness to Company K. The enemy opened up on the relief force, and he positioned his gun in the foremost position.  After a vicious fire fight the platoon was forced to withdraw to regroup. Private First Class Hartsoe knew that without the fire power of his gun, the platoon would be unable to recover the casualties and carry them to safety. Calmly accepting the consequences of their action, he and his team leader held their position under heavy automatic fire and a barrage of grenades, delivering covering fire while the others pulled out of the entrapped area. With complete disregard for his own safety, he held his own position until mortally wounded. By his dauntless courage, indomitable fighting spirit and loyal devotion to duty, Private First Class Hartsoe was instrumental in saving several Marine lives and thereby upheld the highest traditions of the Marine Corps and the United States Naval Service. He gallantly gave his life for his country.