Floyd Tyrone Flowers was born on July 26, 1945 in South Coatesville, PA. He preferred being called “Tyrone”. In his youth, he was an outstanding boy scout. Paul L. Johnson, scoutmaster of Troop 232, called Tyrone “an excellent boy, a good leader and a boy you want to see grow up to become a young man.” He was a leader, having attained the rank of Life Scout, and took over the meeting for the scoutmaster when necessary. Before Flowers left for the service, the troop had a farewell dinner to show its appreciation for his services. The scoutmaster said, “Tyrone was ambitious and knew how to get things for himself. He got into some trouble at school once but wanted to return. But he went into the service then.” Flowers sang with the youth chorus as a member of the First Apostle Church.

Tyrone joined the Marines on May 19, 1965. He left school in tenth grade. Emory Bachman, who is general manager of the store, called Tyrone “a wonderful fellow,” and further said. “he was well liked and very courteous,” During his final leave before being sent to Viet Nam, Flowers spent three weeks working in the store and visiting his family. This Marine wanted to return to the store after his discharge. 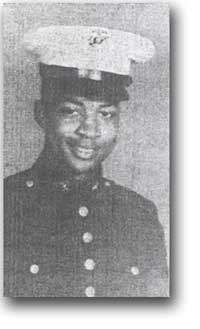 Upon entering the Marine Corp, Pvt. Flowers completed basic training at Parris Island, SC, and further training at Camp Lejeune, NC. Tyrone arrived in Vietnam on Dec. 13, 1966, and was killed one month and one day later. At only  21 years old, Lance Corporal Flowers was killed near Da Nang in South Vietnam on January 15, 1967. A telegram sent to his sister, Mrs. Mary A. Gibbs, stated he died when he “sustained fragmentation wounds to the body from a hostile mortar round while in a defensive position.”  Funeral services were held January 25, 1967 at the Union Baptist Church, South Coatesville. Elder Leroy R. Hines, pastor, officiated and gave the eulogy. Interment was in Church of Christ Cemetery, Ercildoun, PA. Pallbearers were Gy Sgt. R. R. Thomas, Gy Sgt. L. Smith, Jr., Sgt. J. W. Coburn, Sgt. B. J. Bandy and Sgt. K. E. Lotridge. The bugler was Pfc. Hydeck, M. S.. Military services were conducted by detail units from the Fourth Marine Corp District, including the Marine Training Base at Folsom, PA, Camden N. J., and Philadelphia. L/Cpl William Fleming was the escort. 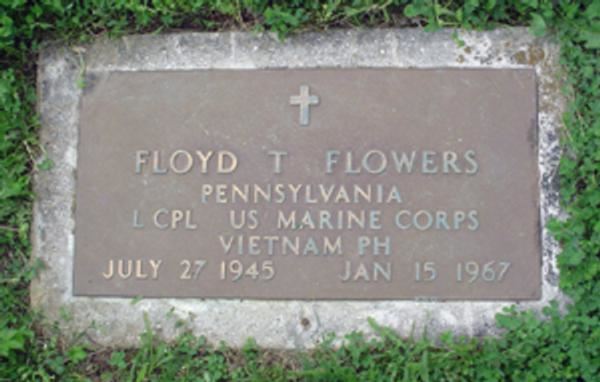