Ronald Richard King was born on July 12th, 1945 to Paul and Anna King. Ronald had four siblings. Ronald's favorite pastimes include camping in the mountains, bodybuilding, and boxing. He collected Elvis Presley records and coins. Mechanically inclined, Ronald loved cars, especially Fords. His brothers, Robert and Roger, loved Chevy's, so the family always had an inside joke between which carmaker was better.

King graduated Avon Grove High School in 1965. He worked at NVF (National Vulcanizing and Fiber Co.). He also worked for the Sun Oil Company. He was a member of the Kelton Church of Christ.

One year after he graduated, Ronald was stationed at Fort Riley, Kansas. Although he had not planned on going to war, hecomplied willingly because he felt that his country needed him. He entered the Army on May 16th, 1966 and  began his tour of duty in Vietnam on January 1, 1967, with Company B, 1st Battalion, 12th Infantry. 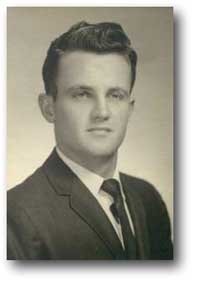 Private First Class King demonstrated his bravery on July 12th, 1967 (also his twenty-second birthday). The Vietcong surrounded his squad on three sides, making it difficult to retreat. King was in charge of the machine gun. When the gun ran out of bullets, he started to throw grenades, and because of his efforts, King's squad escaped. However, King was not as fortunate. How would one describe Ronald R. King? Classmates would call him shy. His sister defines him as upbeat and happy. His brother credits him as kind, loyal, and fair, but stubborn if you crossed him. To most Americans, Ronald King is a hero. He died in Vietnam, the war that lasted a decade and cost 58,000 American lives. King's burial and memorial service took place in Mountain City, Tennessee, where the King family originated. His family received the Purple Heart award for his injury during combat and the Silver Star for his bravery and courage while under fire. Even though Vietnam was not a popular war, Ronald R. King and the thousands who died, as well as all the veterans, deserve our thanks and respect for their role in supporting and serving our country. Ronald King's bravery underscores the definition of "hero" by giving up his life for his comrades and for his country.