James E. Radcliff was born on December 14, 1919 to James and Della Beck Radcliff Sr. of Atglen Pennsylvania. He was one of three children.His father worked for the Pennsylvania Railroad and consequently moved often. He moved his family to Atglen from Ohio.

James attended schools in Atglen and Parkesburg. His English teacher at Parkesburg, Dorothy Martin (Aunt of Hero Robert Montgomery) remembers James as a very likable student, one with a great personality who stood out in a crowd.

His family later moved to Tyrone, Pennsylvania. James graduated from Tyrone High School in 1936. He returned east and attended Millersville State Teachers College in 1936, enrolled in the Bachelor of Science in Education program. James completed his first year, and then returned to Parkesburg to reside with his mother. James obtained employment with Lukens Steel and married Jeanne Cook.

James enlisted in the Army in October, 1941. After basic training and Infantry Officers Training School at Fort Benning, Georgia, he was assigned to Company F, 390th Infantry Regiment the 98th Infantry Division. The 98th Division participated in the Tennessee Maneuvers in the fall of 1943. They were briefly stationed at Camp Rucker, Alabama, before being sent to the Pacific Theater in April, 1944 to be stationed in Hawaii. There, the 98th trained and planned for the invasion of the Japanese homeland, specifically the Osaka area of Kyushu. When Japan surrendered they were sent to occupy Osaka in September, 1945. 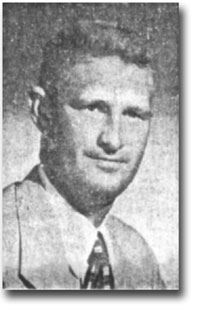 James was discharged in May, 1946 with a terminal leave promotion to Captain. He and his wife purchased a home in Parkesburg with his sister and brother-in-law. James was a member of the Keystone Lodge F & A. M. #569 and the Haubert-Paul Post No. 431 of the American Legion. He was a member of the Parkesburg Presbyterian church, where he served as President to the Choir, and a member of the Board of Trustees. In September, 1948 he returned to active duty from the Army Reserve with his old rank of 1st Lieutenant. He was assigned to Fort Holabird, Maryland where he attended Counter Intelligence Corps. He was then detailed to Special Services. With the outbreak of war in Korea, James requested return to the Infantry and was flown from Lancaster Airport on August 7, 1950, to Korea. He was attached to Company E, 7th Regiment, 1st Calvary division. His unit saw intense action, slowing down the enemy advance while our troops were being built up around Pusan. James volunteered for patrols 21 days in row.  As he returned from what was to be his last patrol, he was severely wounded, receiving multiple wounds in his abdomen from an enemy machine gun.  James was Wounded In Action on September 19th and evacuated to a Tokyo General hospital in Japan. In the hospital, he was recovering, but fell out of bed, re-injuring his wounds. He died from his wounds on October 4, 1950. James was returned to his home country on October 7th for burial. A viewing was held with services conducted by the Keystone Lodge. An honor guard was provided by both the Haubert-Paul American Legion Post, and the Robert Montgomery Post of the VFW. Burial was at Penningtonville Presbyterian Cemetery. James's wife Jeanne had returned to live with her mother-in-law in Lancaster while James was overseas. They had two daughters, Phyllis and Robin, 20 months and 4 years old at the time of James death.   James was posthumously awarded the Bronze Star Medal, as well as the Purple Heart. The citation for the Bronze Star is as follows:

“Learning that friendly forces were in need of intelligence information. Lt. Radcliff volunteered to lead a reconnaissance patrol across the Naktong River for the purpose of observing enemy movements and capturing prisoners.

Lt. Radcliff lead his men so skillfully and courageously that they penetrated a mile and a half behind enemy lines. Here, Lt. Radcliff, with three of his men, captured three of the enemy and observed the disposition of enemy forces.

Returning to friendly lines the patrol captured another enemy soldier before re-crossing the river to safety. By his aggressive leadership and fearless disregard of personal safety. Lt. Radcliff accomplished a valuable mission and returned with the needed intelligence data.

His heroism reflects great credit upon himself and the military service.”