Randolph Winchester was the son of Mr. And Mrs. John Winchester, of Ercildoun, Pennsylvania. On October 1, 1943 these parents received a telegram from the Navy Department that their son, Randolph, who enlisted in the Navy in August 1942, was missing in action. No further details were given and the Winchesters did not know what vessel their son was on or where the action occurred.   Additional information was received by the parents on November 3, 1944 that Randolph Winchester, 22, ship’s cook, 3rd class, Navy, was presumed dead.  He had been missing in action since September 25, 1943, when his ship, the U.S.S. Skill, a Minesweeper, was torpedoed and sunk off the coast of Italy.

A letter from James Forrestal, Secretary of the Navy, to the Winchesters, read as follows.


Your son, Randolph Winchester, Ship’s Cook third class, United States Navy, has been carried on official records of the Navy Department as missing in action since September 25, 1943.  He was serving on board the U.S.S. Skill when that vessel was torpedoed and sunk while engaged in anti-submarine patrol off Salerno, Italy.  The severity of the explosion caused the ship to sink very rapidly. Several American vessels in the area proceeded quickly to the scene of action and rescued the survivors. 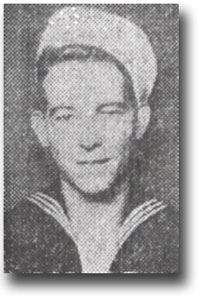 In view of the length of time that has elapsed, the prompt and ample rescue facilities under favorable conditions, and the strong presumption that your son lost his life at the time of the torpedoing or very shortly thereafter; I am reluctantly forced to the conclusion that he is deceased. Pursuant to the provisions of section 5 of Public Law 490, 77th Congress, as amended, his death is presumed to have occurred on September 26, 1944, which is the day following the expiration of twelve months in the missing status.
I extend to you my sympathy in your great sorrow and hope you may find comfort in the knowledge that your son gave his life for his country upholding the highest traditions of the Navy.  The Navy shares in your bereavement and has felt the loss of his service.

Surviving Seaman Winchester besides his parents is a twin brother Pfc. Rudolph who is in the Army overseas; two other brothers, Pvt. Jesse, in the Army and Elwood in the Navy, also overseas;.   This hero was awarded the Purple Heart, and is listed on the Tablet of the Missing in Action or Buried at Sea at the Sicily-Rome-American Cemetery in Nettano, Italy. The U.S.S. Skill (AM-115) a minesweeper of the Raven-Auk Class, was launched on June 22, 1942 and placed into service on November 17, 1942, under the command of Lt. Comdr. E. J. Kervern USNR. The ship was 221 feet long and displaced 890 tons. After a brief shakedown cruise, Skill was ordered to the Mediterranean Sea where she swept mines and performed other mine-warfare countermeasures along the North African coast before the invasion there.   After the initial invasion of Salerno, Italy, she was assigned patrol and convoy duty in that area. She returned to the area from escort duty on 25 September 1943 and was assigned a patrol station.  At 1140, not long after she had taken station, her forward magazine exploded. This was probably due to a submarine’s torpedo because a survivor, whose station was on the bridge, later reported having seen a wake of unknown origin paralleling the ship at a distance of about 150 yards. Skill was blown in half and the forward section capsized. The other half caught fire, and the flames moved aft until that section exploded and sank at about 1200 hours. Ten minutes later, the capsized bow slipped beneath the waves. Of her 103 officers and men, none of the officers and only 32 of the men survived. Skill (AM-115) was awarded one battle star for her World War II service.