Joseph Vasko was born on January 10, 1925 in Phoenixville, Pennsylvania.

Joseph graduated from Phoenixville High School in 1942 and obtained employment at the Boiler Engineering Supply Company.

Joseph enlisted in the Naval Reserve on August 2, 1943. He received basic training at Great Lakes Naval Station in Illinois, and on October  16th was assigned to the Troop Transport USS Elizabeth C. Stanton (converted from the SS Mormacstar).Upon arriving in Bizerte, Tunisia; Ship Fitter 3rd class was transferred for duty on the LST-314.

LST’s were newly created ships, which could sail right up on the beach to load/and or unload heavy equipment and supplies through their bow doors.  They sometimes would unload heavy equipment onto barges just off shore to lighten the ship (as they did at Normandy in the first waves). They were slow, flat bottomed rolled and pitched quite a bit, and were nicknamed Large Slow Targets.  But this type of ship was essential to an amphibious landing. 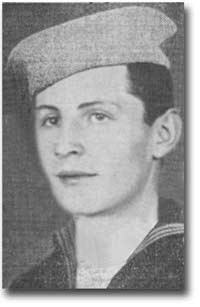 At Weymouth Harbor, southern England, Joseph’s ship was loaded with DUKWS (Amphibious Trucks pronounced DUCKS) small assault boats and troops for the Normandy Landings on June 6, 1944 – the liberation of Europe. On June 6, LST-314 led the other LST’s through the mined cleared channel towards Omaha Beach. The LST’s unloaded their heavy equipment, then received casualties for transport back to England.  Back at Weymouth Harbor, Joseph’s ship loaded more supplies for Normandy. On the night of June 9th, Joe Vasko’s ship crossed the heavily congested English Channel once again. As it neared the Normandy beaches, LST-314 was sunk by a torpedo fired from a German E boat (torpedo boat).  Ship fitter 3rd Class Joseph Vasko was Killed In Action June 9, 1944, during the attack. His mother, Mary, received the telegram that Joseph was Missing In Action on Monday July 3rd. On July 21st, the Navy changed his status to Killed In Action.. Joseph is remembered on the Tablets of the Missing or Buried at Sea at the Normandy Cemetery at Colleville-sur-Mer, France