Sidney Toney was born in the Bronx, New York, on August 15, 1922. His parents were Mr. and Mrs. Montry Toney. He was the youngest of three children. He graduated in 1941 from Clyton High School.

Sidney followed his brother and moved to Coatesville in 1943 to live with his Aunt and Uncle. He attended the African Methodist Episcopal Church. Tony was known as a very quiet, considerate young man. He obtained employment at Lukens Steel in it’s Employment Reserve.

In July, 1943, Sidney was inducted into service with the Navy. He served six months in the states before serving in the South Pacific. Sidney was assigned to the Argus Unit 9, serving in the central Pacific as Stewarts Mate 1st Class. On April 18th, while on an authorized swimming party at Nukefetau  Atoll, Sidney accidentally drowned.

Sidney was buried in a local military cemetery Tutuila, Samoa. In October, 1947, he was brought home for burial in his home country. Funeral services were held at the Florence Brown Funeral Home in New York, followed by burial at the Long Island National Cemetery in Pinelawn, New York, with full military honors.

Sidney Toney was the 10th fatality among Coatesville residents in World War II. 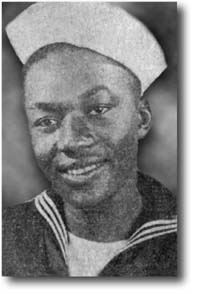 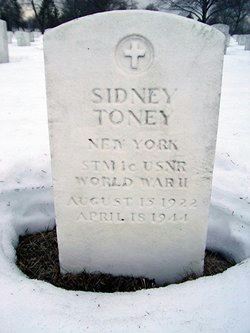