Joseph Francis Sheehan was born on February 20, 1922 to T. Joseph and Helen Sheehan who lived in Landenberg, Pennsylvania. Joseph was one of two children.

Joseph’s father was a World War I veteran. After the war, he and his brother, Francis, bought a lumberyard renaming it the Sheehan Brothers Feed and Lumber Yard. He also began an insurance agency, insuring mushroom companies and local homes. The Lumberyard also became the location of the Landenberg Post Office with T. Joseph as the Postmaster.

Joseph’s mother graduated from West Chester Normal School (today West Chester University), and became a teacher at the local school, the ‘little red school house’. When she married T. Joseph, she quit teaching. T. Joseph was a commander of the William W. Fahey Post 491, and later the 8th District Commander of the American Legion. He passed away in 1941. His wife became the Postmistress of Landenberg. The family was well known and respected in Landenberg. 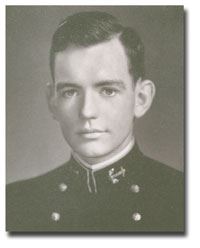 Joseph was active in the Boy Scouts, a member of the William W. Fahey American Legion Post, and of the St. Patrick’s Church. Joseph graduated from Kennett High School in 1940. He was a brilliant student and outstanding athlete. Joseph was the Class President each year of high school and was a member of the debating club. At graduation, Joseph was an honor speaker and was given the School Cup for his outstanding contributions to the school. After graduation, Joseph attended Pennsylvania State College for one year. He was honored by being invited to join the Sigma Phi Alpha Chester County fraternity, which up until that time, admitted only those affiliated with the Society of Friends. Joseph obtained an appointment to the United States Naval Academy in Annapolis, Maryland entering in 1941. With the beginning of World War II, and the need to greatly expand the Navy, the 4-year program was accelerated to a 3-year program. The Lucky Bag, the academy yearbook, says of Joseph:

Although many at the Naval Academy came from big cities, some called a small town their home. Joe came from a small town – of about a hundred or so people. With him he brought into our midst all of those qualities of a gentleman for which we all had been striving for such a long time. We remember how easy it was to make friends with “Uncle Joe.” How could we resist that ever-present smile – that kind “hello” – that incessant countenance that denoted the determination of Joe’s fighting Irish heritage? Joe understood the Navy’s stern call: faith, courage, service true – with honor over all. That call was thoroughly mixed in the code by which he lived.


Joseph graduated from the Naval Academy in 1944, and commissioned as an Ensign. Ensign Sheehan was assigned to serve on the newly commissioned USS Astoria, CL-90, a Light Cruiser of the Cleveland Class. The Astoria was constructed at Philadelphia and commissioned on May 17, 1944, then sailed for the Pacific and assigned to Task Force 38, our main task force of fast carriers, or battle fleet under Admiral ‘Bull’ Halsey. (The same force was called Task Force 58 when under Admiral Spruance, who rotated command with Halsey). The Astoria survived the infamous Typhoon December 17-18, which caused considerable damage to the fleet, including the loss of three destroyers. Wind speeds averaged 70 knots with gusts up to 120 knots (138 miles per hour) and many of the smaller ships rolled 70 degrees. 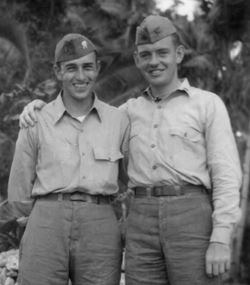 Sheehan’s ship participated in the support of the liberation of Luzon, Philippines in January, 1945. With the rotation of command to Admiral Spruance and the Task Force designation of TF-58, the Astoria was involved with carrier raids against the Japanese home islands in February, the first bombing of Japan since the April, 1942 Doolittle Raid. The ship supported the landings at Iwo Jima later in the month, and landings on Okinawa in March. Ensign Sheehan served on the Astoria for 16 months. Joseph requested Naval Aviator training and was sent to Pensacola, Florida. He received his golden wings as a Navy Pilot in February, 1947. Joseph, promoted to the rank of Lieutenant (jg – junior grade) was sent to Banana River, Florida for training in torpedo bombers until July. He then received a 30 day leave, which he spent at home in Landenberg. Joseph then reported to Norfolk for radar training, and was assigned to the Atlantic City Naval Air Station in New Jersey. On January 8, 1948 he was ordered to Norfolk for carrier qualifications on the USS Saipan, CVL-48. The Saipan trained pilots to land on carriers. After training on landing on a painted carrier runway on land, they need to make three successful ‘traps’ to qualify. Additionally, with each deployment on a carrier, they need to re-qualify.
Landing on an aircraft carrier is a difficult process, likened to a controlled crash. The aircraft must land on a rolling, pitching, moving deck, come in low with the aircraft tail hook down, trying to stall over the flight deck, slam down so the hanging tail hook catches one of the arresting cables bringing the aircraft to a rapid stop. Missing the cables, the aircraft needs to accelerate to try to become airborne for another try, turning to the port (left side – the ships ‘island’ or superstructure is on the right) to avoid parked aircraft on the forward portion of the deck. The pilot is directed by the LSO, the Landing Signal Officer, himself a pilot, who directs the incoming pilot with signal flags and lights from a location on the port side. On January 18, 1948, Joseph made his first successful carrier ‘trap’. On his second attempt, he was given the abort or a “wave off” by the LSO. He jammed the throttle to full power, but his engine cut out, and he was unable to gain altitude. The aircraft spun into the water, landing on its back. The aircraft broke up on impact, and sank in about 40 seconds. A destroyer on ‘plane guard’ duty was on the scene immediately. Two destroyers and aircraft searched for Joseph for over two hours, but he was never found. A fellow pilot, one of Joseph’s best friends, was landing behind him and nearly suffered the same fate.
On the 19th, his mother received the fateful telegram of her son’s loss. The Captain of the Saipan, Capt. John G. Crommelin, sent a personal letter to the family explaining the accident and offering his deepest condolences. Two fellow lieutenants also sent letters to the family. A Memorial Mass was celebrated on Tuesday February 3, at Saint Patrick’s Church. Capt. Crommelin and three fellow lieutenants attended the service.