Clarence W. Pickhaver was born in 1922 and lived in Wilmington, Delaware. Clarence was one of four children. His mother died when Clarence was five years old. His father was unable to care for the children after the death of his wife. Margaret Himelright found Clarence sitting on a street corner and brought him home to feed and clean him. Upon inquiry, they understood his family situation, and Margaret and Raymond Himelright adopted him. His foster parents lived in West Chester. Raymond operated a dry cleaning establishment and was a Borough Councilman. He also served as coordinator for the Civilian Defense of West Chester.

Clarence was raised by the Himelrights with their child, Raymond, Jr. who was born later. Clarence's sister, Stella also lived with the Himelrights for a few years. Clarence was educated at St. Agnes High School in West Chester.  He was popular among the young people of the borough and was known by the nickname “Ducky”.

Clarence joined the Navy a few days after the attack on Pearl Harbor. After basic training, he was assigned to the destroyer USS Bristol DD-453. The Bristol was a new destroyer of the Benson-Livermore Class,  which were rated at a top speed of 37 knots.

Clarence returned home on leave in February, 1942. At the time, he was rated as a Seaman Apprentice working in the engine boiler room of the ship. The Bristol operated as convoy escort, protecting ships that were making several transatlantic trips to Ireland.

In April, Clarence became gravely ill; the ship’s doctor diagnosed a ruptured appendix. Emergency surgery was performed aboard ship, but his heart failed. He was given artificial respiration for four hours in an attempt to revive him, but to no success. Seaman Apprentice Clarence Pickhaver died on board ship on April 9th – one day from returning to port in Boston.

The family was notified by telegram on April 14th. Although Clarence qualified for burial in a National Cemetery, the family wished him to be buried in their family plot in West Chester. Clarence was laid to rest at St. Agnes Cemetery. Representatives from the Navy, Army and Army Air Corps were attended his service to render honors.

The Captain of the Bristol, Commander C.C. Wood, wrote the following in a letter to Clarence' parents:

“During the time that your son served on this vessel he endeared himself to his shipmates in many little ways. He established for himself a reputation as a willing, cheerful worker and a good companion. He was one of the finest type of American manhood and his loss is felt by us all. I was proud, as his commanding officer, to have him in my crew. To you, I can pay him no higher tribute.”


Clarence was the first casualty from West Chester reported during World War II. His ship, the USS Bristol, hit a mine and sunk a few months after his death in the Mediterranean with a loss of 52 crew members.

His adopted father, Raymond Himelright, offered free dry cleaning to servicemen during the War.  He collected over 200 unit patches from West Chester Service men and proudly displayed them in his store. The framed patches were donated by the family to a local military museum in West Chester. 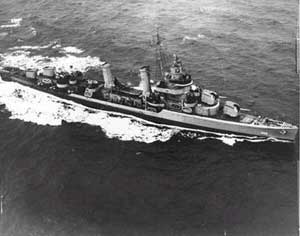 At left, an arial photo of the USS Bristol, taken April 18, 1943 - just nine days after Clarence Pickhaver died on board from complications following a ruptured appendix. On October 13 1943, while escorting a convoy to Oran, Algeria, the Bristol was struck by an enemy torpedo fired by German submarine U-371 on the port side at the forward engine room, causing the ship to break in half. She suffered the loss of 52 of her crew, The survivors were rescued by Trippe (DD-403) and Wainwright (DD-419). U-371 was sunk by allied ships later in the war. Today, both ships are among the many wrecks frequented by divers in the Mediterranean sea. 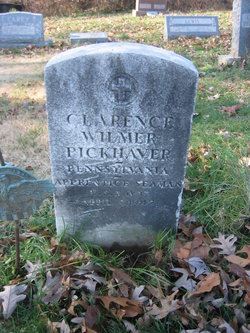