Vincent Philip Kuleski was born on November 19, 1918 in Phoenixville, Pennsylvania.  He was one of five children.

Vincent was schooled in Phoenixville, and was employed by the Phoenix Iron Company.

Vincent joined the Naval Reserves in December, 1942. He married Mary Rose Coccia the day after Christmas1942, and reported for duty four days later.

Vincent was assigned to a merchant ship - the Liberty ship, SS Charles C. Pinckney. The ship left New York in Convoy USG 4 in route to the Mediterranean Sea. On January 27th Vincent’s ship was torpedoed by a German Submarine, U-514 about 200 miles south west of the Azores (36o 37’ N, 30o 55’W) on her way to North Africa. 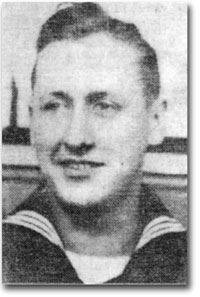 The torpedo hit the stern of the ship, disabling the engine and  the order was given to abandon ship.  The U-boat approached to finish off the Pinckney, but the Naval Armed Guard stayed on board for a time to man their guns and fire on the submarine hitting it and driving it away.  The Armed guard then abandoned ship. The survivors manned four life boats. The next morning they discovered the ship is still afloat.  As they rowed back to the ship in the rapidly increasing bad weather, the U-514 reappeared and sunk the Charles C. Pinckney with her deck gun. A storm separated the four lifeboats, only one made it to safety. His wife and parents were notified that Vincent was Missing In Action as of February 1943. In February, 1944, Vincent was declared to be presumed dead. The letter from the Secretary of the Navy stated:

Your husband, Vincent Philip Kuleski, Seaman 1/c, United Sates Naval Reserve, was serving as a member of the armed guard crew on board a merchant vessel which was torpedoed on 27 January in 1943 in the mid-Atlantic.  The ship was abandoned in several lifeboats and life rafts, which encountered a gale and exceptionally heavy seas.  Only one lifeboat and none of the life rafts reached safety.
In view of these circumstances and due to the length of time that has elapsed, I am reluctantly forced to conclude that your husband is deceased.
My sincere sympathy is extended to you in the great loss, and it is hoped that you may find comfort in your knowledge that your husband gave his life for his Country, upholding the highest traditions of the Navy.  The Navy shares in your sense of bereavement and feels the loss of his service.

Vincent is remembered at the Tablets of the Missing in Action at the North Africa American Cemetery in Carthage, Tunisia.