Herman attended the Salem School, a on room school house. Today it is the Salem Tavern.

On July 5, 1943 Herman, better known as Bucky, enlisted in the service. He was inducted into the Navy as an Apprentice Seaman class V-6, U.S. Naval Reserves at the Philadelphia NRS for an enlistment of 2 years. He was called to active duty on July 12, 1943 to the Naval Training Station in Sampson, New York. On September 1, 1943, was promoted to Seaman 2nd Class.

On September 17, 1943, Bucky was transferred to the Armed Guard School in Virginia. The Armed Guards were established to protect merchant ships from enemy subs, ships, and aircraft. Their casualty rate was 2nd only to the US Marine Corps. This was due to the fact that they were usually placed on the ships with guns, but had no battleship or aerial escorts. Many times they were on tankers that contained high octane fuel that was supplied to troops around the world. 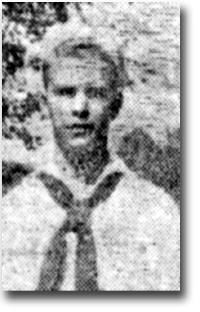 On October 18, 1943, Bucky achieved the rank of Seaman 1st Class. He was detached as an Armed Guard on the SS David Caldwell on October 20, 1943. While on the SS David Caldwell he was sent to Liverpool, Gibraltar, Naples, Boston , New York City, Augusta, and Halifax.. His duty on the SS David Caldwell ended on August 29, 1944. He then completed additional training before being assigned to the SS Oklahoma. The SS Oklahoma was unique, in that it was sunk twice. The first time was on April 8, 1942 by a German U-Boat off St. Simon Island, Georgia. Nineteen sailors lost their lives. The SS Oklahoma was raised  and towed to St. Simon’s Sound where temporary repairs were made. The SS Oklahoma was towed to the Sun Shipyard at Chester, Pa. and arrived on May 23, 1942. It left the shipyard on Jan. 2, 1943 for active duty. Herman was detached to the SS Oklahoma on September 22, 1944 as an armed Guard gunner. The SS Oklahoma was a tanker owned by the Texaco Company and was carrying 100 octane fuel. Some of the ports of call were Pearl Harbor, Cristobel, Aruba, Dakar, Gibraltar, Algiers, Curacao, Accra, Lagos, Trinidad. On March 23, 1945, the SS Oklahoma left St. Nicholas Harbor, Aruba carrying over 100,000 barrels of the high octane gasoline. They were en route to Dakar, and expected on April 1st. At approximately 1:45 a.m. on March 28, 1945 the ship was struck by a torpedo from a German U-boat. This caused a violent explosion. Immediately, the ship was ablaze from stem to stern. Those that were able took to lifeboats. However, Bucky was stationed in the part of the ship that took the direct hit. In a letter from the ship's captain to Bucky’s mother, he was stated that Bucky had finished his watch and retired to his bunk to sleep. The point of impact was his sleeping quarters. The survivors circled the ship for five hours searching for any shipmates that may have survived. Fourteen armed guards lost their lives when the SS Oklahoma went down. Bucky was only 16 days shy of his 20th birthday.  Bucky was at first reported missing in action, then declared dead on October 12, 1945. The official letter was sent to his parents on December 17, 1945. Among his commendations are the Bronze Star for his part as an Armed Guard Crew during the Bombardment of the Coast of France June, 1944 and the Purple Heart awarded posthumously. A stone marker stands in his honor at the family plot in Bethel Methodist Cemetery. SS Oklahoma - the morning after the attack.One of the survivors of the SS Oklahoma related that only crew members on the bridge were able to get off the ship. He said even though it was dark, the flames lit the area well enough to see that no survivors were in the water. They waited until daybreak and completely circled the ship. Again there were no signs of survivors. When they left the area, the ship was still burning and afloat. They drifted for 18 days and about 1,500 miles. They were finally picked up by the SS Delaware and taken to Aruba. Herman's brothers William, Samuel, James, Frank, and Edward all served at the same time. All were wounded. Bucky was the only one to make the ultimate sacrifice in the service of his country.