Thomas Boyd Jr.  was born on April 4, 1925 to Thomas and Fannie Boyd who lived in Coatesville, Pennsylvania. Thomas was one of six children. Thomas attended the James Adams School. The Adams School provided education for Afro-Americans from Kindergarten through 9th grade.

After graduation from the Adams School, Thomas attended the S. Horace Scott High School. He played football and loved auto mechanics. Thomas developed his talent for singing, and often stayed after school to practice. He was chosen to become a member of the High School Meistersingers, a renowned choral group. He was one of 10 students from the school selected to sing with the All-State Chorus in January of 1942. He won awards for his talented voice, including 2nd place for mixed quartet at the State championships.

Thomas became a member of the Hutchinson Memorial U.A.M.E. Church. He was known as a jovial and likeable person. He loved to dress well and was very neat in appearance.  The Yearbook says he was “hardy, happy, trustworthy…has many friends,…contagious grin,” and has “ambition.” 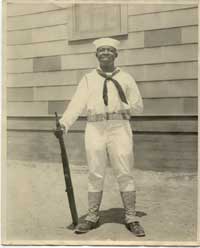 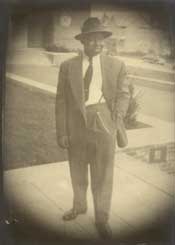 After graduation, Thomas obtained employment with the Pennsylvania Rail Road as a laborer. He was called to service and entered the U.S. Navy on June 8, 1943. He was sent to Great Lakes Naval Training Center in Illinois. After completing boot camp, Thomas was sent to the  South Pacific and stationed on New Hebrides, a group of Islands in the Coral Sea, West of Australia and South of the Solomon Islands. Two days before his 19th birthday, Seaman 2nd Class Thomas Boyd Jr, was killed by a Japanese sniper. His parents received the telegram of his death on April 15th, from Vice Admiral Jacobs, Chief of Navy Personnel. A memorial service was held at the Hutchinson Memorial U.A.M.E Church with a large attendance from the community. The flag and service flag are still held at the church. Thomas was buried at the Punch Bowl National Cemetery in Honolulu, Hawaii with full military honors The James Adams School dedicated their new library as the Thomas Boyd Memorial Library on May 18th, 1944.  A tree was also planted in his honor at the playground at 9th and Chestnut Streets.